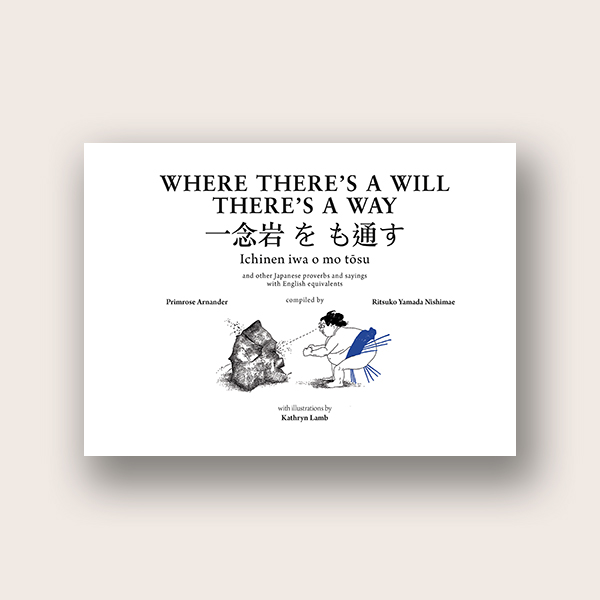 Japanese Proverbs and their English equivalents. This latest title in the hugely popular series of proverbs from around the world focuses on the richness of Japanese culture and language and highlights the uncanny similarity of inherited wisdom between the East and West.

The English may say, ‘Where there’s a will there’s a way,’ and the Japanese, ‘A concentrated mind pierces even a rock’, but the meaning is clearly the same.

‘Too many boatmen sail the boat up the hill’ may be the same as the English, ‘Too many cooks spoil the broth’, but the Japanese version has a delightful absurdity about it which is illustrated in Kathryn Lamb’s witty cartoons.

These and many more proverbs and sayings feature in Where There’s a Will There’s a Way, which joins the family of six other bilingual illustrated proverb books, devised in 1985 by Primrose Arnander and the late Ashkhain Skipwith.

Each title in the series gives the proverb in its original (and where the scripts are different, provides the original script and its transliteration), the literal translation and the English equivalent.

They are not intended as weighty works of scholarship, but rather as a source of entertainment.

They make the perfect gift, as well as being useful to language students, whatever their native tongue.

The cartoonist Kathryn Lamb has brought her skills to all seven titles.

Kathryn Lamb contributes cartoons to The Oldie, Spectator and Private Eye. She has had several exhibitions and has written several books, illustrated by her own cartoons, about teenage life; they have been translated into many languages. Her cartoons are sold in The Cartoon Gallery, London.

Primrose Arnander is co-author of the three collections of Arabic proverbs and one of French proverbs - with English equivalents. She is also co-author of Gertrude Jekyll - Essays on the Life of a Working Amateur.

Ritsuko Nishimae studied cultural anthropology at university and is a qualified
psychotherapist. After living in America, Canada and London, she returned to Japan with many insights into the cultural contrasts between East and West. She met Primrose in London in 2012.

Don’t Toss Granny in the Begonias

You Can’t Get Blood Out of a Turnip

Spirit of the Wind: A Photographic Celebration of the Wild Horses of the Namib Desert

The Son of a Duck is a Floater

Aintree: The History of the Racecourse