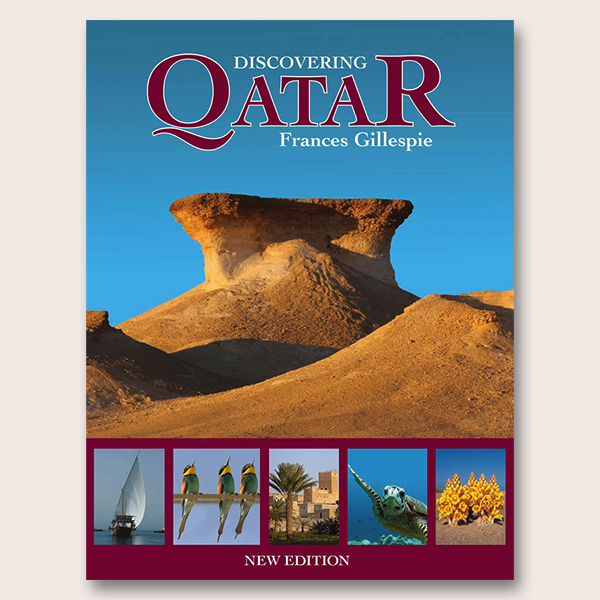 Evolved from a series of features on the archaeology, natural history and traditional life of Qatar, this is a thoroughly updated edition of this bestselling book, with new and improved illustrations.

Additional topics include whale sharks and the huge progress by archaeologists. Discovering Qatar reflects the author’s enthusiasm for the country and readers will enjoy learning more about the ‘real’ Qatar.

Available in hardback and paperback

Discovering Qatar evolved from a series of features on the archaeology, natural history and traditional life of Qatar that Frances Gillespie began publishing in a national newspaper in the late 1990s. There was little available on these subjects for the general reader, and many people, especially those involved in education, asked for them to be compiled into a book. The author had no idea at that time what the demand would be, and hoped that, perhaps, a few hundred copies might find a market.

Two reprints and 12,000 copies later, the time has come for a thoroughly updated edition of the book, with new and improved illustrations, and including the latest information on such fascinating topics as the whale sharks which congregate in large numbers in an off-shore oil field, the presence of which had not been noted by scientists when Discovering Qatar was first published in 2006. Research into Qatar’s past by teams of archaeologists has made huge progress in the last decade, culminating in the old pearling and trading settlement of Zubara being inscribed as a Word Heritage Site in 2013.

During the 30 years Frances Gillespie lived in Qatar, the country made a gigantic leap forward in development, with a modern capital to rival any in the region. As a freelance journalist and writer she has the freedom to concentrate on subjects that interest her. Discovering Qatar reflects this, and the author and publisher hope that readers will share her enthusiasm and enjoy learning more about the ‘real’ Qatar – the Qatar that was there all the time.

Frances Gillespie has lived in Qatar for almost 30 years, working as an English teacher for many years and as a freelance writer, contributing to the media and writing books about the history and natural history of Qatar. In 2000 she was the coordinator of the Qatar Archaeology Project, a joint initiative between the Qatari authorities and the University of Birmingham.

Her best-selling book Discovering Qatar, first published in 2006, was the first to introduce readers to a wide range of natural history as well as to the traditional culture, history and archaeology of Qatar. Since then she has published the first field guide in English to the birds of Qatar, which has now been translated into Arabic, and a series of six books for young readers on the fauna and flora of the country, in English and Arabic. She also acts as scientific editor on a number of publications, and has adapted an educational interactive website on the environment for use in Qatar.