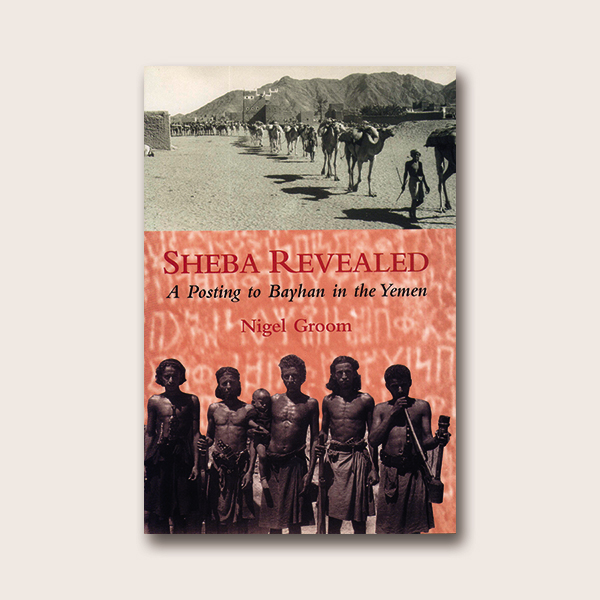 Sheba Revealed depicts the people, customs and antiquities of this remote part of Arabia with compelling verve and candour. Its close, sympathetic and skilful observation of a single locality places it in an unusual niche among accounts of Arabian travel. And it will engage all those with an interest in pre-Islamic archaeology, colonial history, Arabian society and Yemen’s transition to the world of today.

During the late 1940s, British governance of the Western Aden Protectorate was being tentatively extended by a handful of hardy officials whose reputation for incorruptibility and even-handedness went before them. Of these the young Nigel Groom was one. Posted to the almost inaccessible Wadi Bayhan in 1948, he was to spend nearly two years amongst the people of what in antiquity had been Qataban, once part of biblical Sheba. The Bayhanis and their neighbours, whose ancient, pre-Islamic lineage was evident all around in the imposing remains of cities, irrigation works and formal inscriptions, exerted a powerful fascination on the young Political Officer which has never since waned. As representative of a distant government, Groom naturally met with an ambivalent reception from the local people, many of whom lived in areas that were still uncontrolled and unadministered. His book recounts a young official’s brave efforts to influence obstinate rulers and to demonstrate, to clans and tribes who for centuries had settled disputes by violence, the benefits of the rule of law. His doubts and moral dilemmas, his personal relationships, and the pitfalls of inexperience amongst the intricacies of a tribal society, are honestly described, and add depth, dramatic tension and occasional hilarity to the tale.

Nigel Groom. Nigel Groom, OBE, was a British Arabist, historian, author, soldier, counter-espionage officer in MI5 and perfume expert. These pursuits saw him fend off a tribal assassination attempt in Aden, uncover a KGB spy embedded in the RAF and explain the association between frankincense and Christ’s divinity. He was a noted expert on the pre-Islamic history of the Arab world.