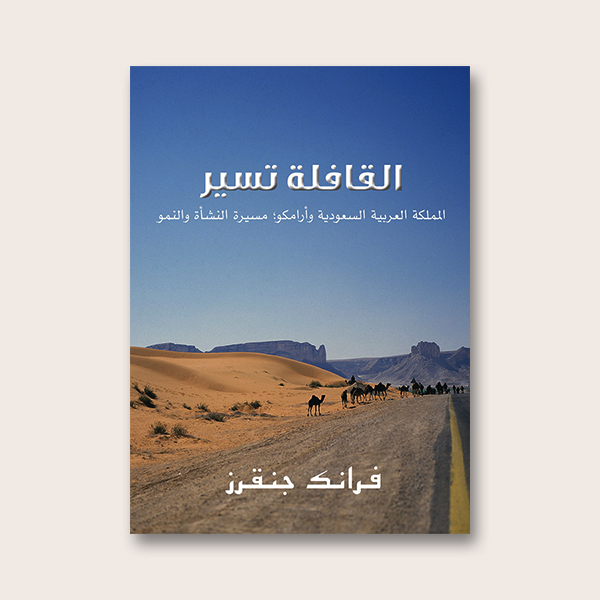 Frank Jungers, former president, Chairman and CEO of the petroleum giant Aramco, tells the inside story of his three decades in Saudi Arabia (1947-1978) with the world’s largest oil producing company. A North Dakota farm boy Jungers rose to the top of one of the most important hydrocarbon enterprises ever.

Out of stock – available in English

The remarkable story of one man’s journey to leadership of the world’s largest energy company, The Caravan Goes On is the first published inside account of the workings of the corporation by a CEO and represents a significant addition to the literature on the turbulent development of the world’s oil industry. Frank Jungers, former President, Chairman and CEO of the petroleum giant Aramco, tells the inside story of his three decades in Saudi Arabia (1947-1978) with the world’s largest oil producing company.

A North Dakota farm boy Jungers rose to the top of one of the most important hydrocarbon enterprises ever, a company that eventually found itself responsible for nearly one-quarter of the world’s oil resources. He writes of his face-to-face encounters with King Faisal and other Saudi leaders, and his role in steering the company through major international crises that included the 1973 Arab-Israeli war, the dramatic oil price increases of the 1970s, the Arab oil embargo and the OPEC hostage incident of 1975.

Central to Jungers’ story is his role in helping to develop Aramco’s Saudi workforce in preparation for the eventual transfer of company ownership from four American oil majors to the Government of Saudi Arabia. He explains the unique nature of the ownership transfer, which was remarkably different from the bitter nationalization process seen in Iraq, Libya, Iran and Venezuela. Jungers describes how Aramco and the Kingdom of Saudi Arabia in an important sense grew up together, and he highlights the crucial role played by Aramco in the development of the young nation’s infrastructure and economy.

The Caravan Goes On describes the origins of the petroleum industry in Saudi Arabia, with the granting of a concession in 1933 to a subsidiary of Standard Oil of California, the first of Aramco’s four oil-company parents. Jungers talks of his own origins as the son of farmer in North Dakota, the family’s migration westward due to drought and depression, and his engineering studies at the University of Washington. Jungers began his career in Saudi Arabia working at Ras Tanura, site of Aramco’s first oil refinery and oil tanker terminal. He describes how Aramco built its initial workforce, consisting of Americans, Italians, Saudis and other nationalities; he explains how it soon became clear that the future of the Saudi oil industry belonged not with foreign oil interest but to the people of Saudi Arabia; and he relates how he and others worked to give Saudis the training and incentives needed to take over and successfully operate what would become the world’s premier oil producing and exporting company.

At the same time, Aramco, with its technological expertise and its access to international specialists, began playing a central role in the development of the Kingdom of Saudi Arabia. The company, with support and encouragement of the Saudi Kings, took a lead role in building healthcare, agriculture, the railroads, the electric grid and other sectors of the Saudi economy. The story of the “King Faisal Era” (including the monarch’s role in the oil price issue, the Arab oil embargo and his closed-door meetings with the King and his key advisers, including Oil Minister Shaikh Ahmed Zaki Yamani) are vividly described, as well as the shock of King Faisal’s tragic death and the tense moments of the OPEC hostage incident that began in Vienna and ended in North Africa.

This personal, colorful and up-close view is required reading for oil-industry watchers as well as those interested in big business, geopolitics, America’s role in the Middle East and the extraordinary transformation and emergence of modern Saudi Arabia since oil was discovered in its Eastern Province.

A key figure in Aramco's history, Frank Jungers witnessed and eventually oversaw momentous growth during his three decades with the company. Born in North Dakota, he earned a mechanical engineering degree at the University of Washington and joined Aramco in 1947.

Jungers became President of Aramco in 1971 and was Chairman of the Board and CEO from 1973 to 1978. He initiated the construction of the Saudi Master Gas System, the consolidation of eastern Saudi Arabia's electric power grid and the Saudization of the company workforce while at all times representing the best interest of his American shareholders. He worked closely with King Faisal during the Arab oil embargo and the oil price hikes of the 1970s.

Since retirement in Oregon Jungers has been active with companies in the areas of hydrocarbons and energy, traveled to 200 countries with his wife Julie, an accomplished photographer; and revisited virtually all Arab Middle East countries, especially Saudi Arabia which he considers his second home.

Jungers is active in philanthropy particularly with higher education, medical research and The Nature Conservancy. A former trustee of the American University of Cairo for 20 years, Jungers is especially involved with Oregon Health Sciences University, University of Washington, Central Oregon Community College and Bethlehem University in Palestine.