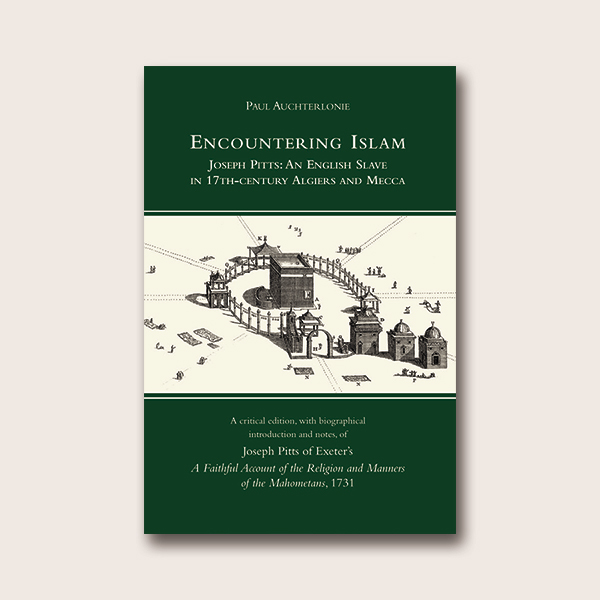 Long before European empires came to dominate the Middle East, Britain was brought face to face with Islam through the activities of the Barbary corsairs. For three centuries after 1500, Muslim ships based in North African ports terrorized European shipping, capturing thousands of vessels and enslaving hundreds of thousands of Christians.

In hardback and on eBook (kindle)

Encountering Islam is the fascinating story of one Englishman’s experience of life within a Muslim society, as both Christian slave and Muslim soldier. Born in Exeter around 1662, Joseph Pitts was captured by Algerian pirates on his first voyage in 1678. Sold as a slave in Algiers, he underwent forced conversion to Islam. Sold again, he accompanied his kindly third master on pilgrimage to Mecca, so becoming the first Englishman known to have visited the Muslim Holy Places. Granted his freedom, Pitts became a soldier, going on a campaign against the Moroccans and Spanish before venturing on a daring escape while serving with the Algiers fleet. Crossing much of Italy and Germany on foot, he finally reached Exeter seventeen years after he had left. Joseph Pitts’s A Faithful Account of the Religion and Manners of the Mahometans, first published in 1704, is a unique combination of captivity narrative, travel account and description of Islam. It describes his time in Algiers, his life as a slave, his conversion, his pilgrimage to Mecca (the first such detailed description in English), Muslim ritual and practice, and his audacious escape. A Christian for most of his life, Pitts also had the advantage of living as a Muslim within a Muslim society. Nowhere in the literature of the period is there a more intimate and poignant account of identity conflict. Encountering Islam contains a faithful rendering of the definitive 1731 edition of Pitts’s book, together with critical historical, religious and linguistic notes. The introduction tells what is known of Pitts’s life, and places his work against its historical background, and in the context of current scholarship on captivity narratives and Anglo-Muslim relations of the period. Paul Auchterlonie, an Arabist, worked for forty years as a librarian specializing in Middle Eastern and Islamic studies, and from 1981 to 2011 was librarian in charge of the Middle East collections at the University of Exeter. He is the author and editor of numerous works on Middle Eastern bibliography and library science, and has recently published articles on historical and cultural relations between Britain and the Middle East. He is currently an Honorary Research Fellow at the Institute of Arab and Islamic Studies at the University of Exeter.

He is the author and editor of numerous works on Middle Eastern bibliography and library science, and has published articles on historical and cultural relations between Britain and the Middle East, including the first substantial study of Joseph Pitts, the first Englishman known to have made the pilgrimage to Mecca. He served for many years as Chair of the Middle East Libraries Committee (MELCOM-UK), and was founding Secretary of MELCOM International.