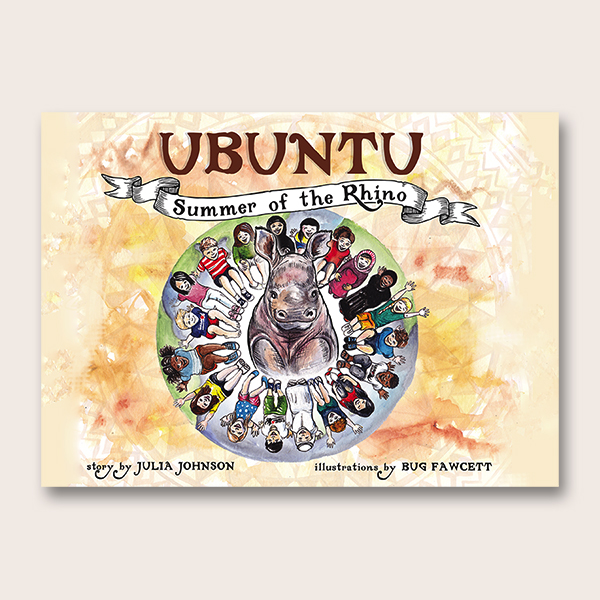 Ubuntu: Summer of the Rhino is brilliantly told and beautifully illustrated and will delight children from the age of eight years upwards. All royalties will be donated to the Rhino Rehabilitation Centre of Rhino Revolution, to help rescue and rehabilitate orphaned rhinos. Merely by buying this book you are making a difference – but do join the Revolution and help make the world a kinder place: visit rhinorevolution.org

As the moon rises over the South African savannah, a young African girl called Thembile and her father, a wildlife ranger, are out patrolling through the night on horseback.

They hear the heart-rending cries of a terrified rhino calf, and find him shivering beside the mutilated body of his mother.

Help is summoned, but who will care for this orphan, look after him and pay for his milk and medicines?

Far away in Dubai, hearing of the calf’s plight, a school comes to the rescue and agrees to support the orphaned rhino until he is old enough to be released back into the wild. One pupil in particular is captivated by the baby rhino.

George – who has recently arrived from England – is a boy with a boundless curiosity and a compassion beyond his years and, whenever he can, he watches the calf’s progress on the CCTV set up by his school and Thembile’s father.

He is fascinated by the way the African girl and the rhino seem to bond as the weeks go by.

When, one afternoon, the young girl doesn’t appear at her usual time, George is convinced that she is in danger.

What can have happened to her?

And is the orphaned rhino in danger too?

George knows something is wrong, but what can he do when he is thousands of miles away?

Ubuntu is a Bantu word made famous by Nelson Mandela, and means ‘human kindness’ or – literally – ‘human-ness’.

The story of Ubuntu the rhino weaves back and forth across continents, at once heart-breaking and heart-warming.

It shows how all our lives, both human and animal, are intertwined with each other and with nature, and how each one of us can make a difference to the future of the world’s last remaining rhinos.

Julia Johnson is a drama teacher turned children’s author, storyteller and performer who first came to Dubai in 1975. She has appeared on stage, TV and radio in the UK and in Dubai, has toured Theatre-in-Education productions to schools and has recorded over 100 audio books.

Julia’s stories frequently focus on the history and culture of the Arabian Peninsula. She has written over a dozen stories for children including The Camel That Got Away, Humpy Grumpy's Mission Improbable and Ubuntu: Summer of the Rhino, which was produced in partnership with Rhino Revolution. The Turtle Secret won the Best International Children’s Book Award at Sharjah International Book Fair 2014 and The Secret of the Cave in 2018.

She has toured schools and colleges in Dubai, Abu Dhabi and the Northern Emirates, Oman, Bahrain, Kuwait, Qatar and Saudi Arabia with talks and workshops. Commissions have included a story for Qatar’s National Day 2009, an interactive student pack for the Kremlin exhibition for the Abu Dhabi Authority for Culture and Heritage (ADACH) and a series of five short stories for Kraft (Middle East).

She is a regular speaker at the Emirates Airline Festival of Literature (EAFOL) and her books have twice been chosen for the Chevron Readers’ Cup.

Hidden In The Sands: Uncovering Qatar’s Past (Arabic)

A Plan to Hatch