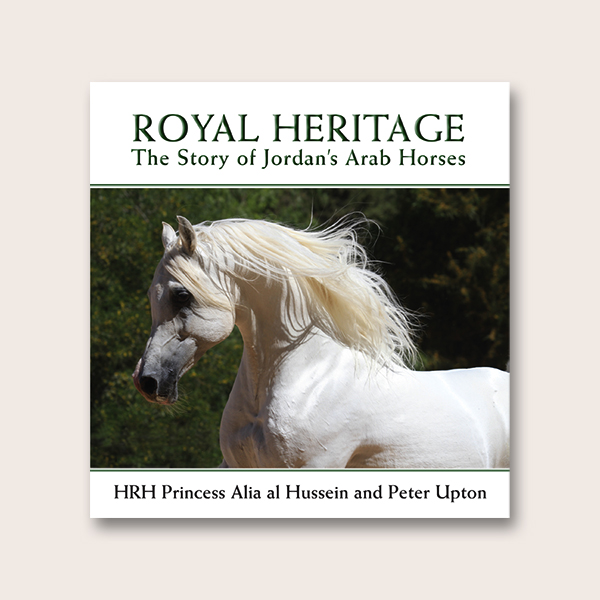 Co-authored by HRH Princess Alia, the eldest daughter of the late King Hussein of Jordan, and the artist and author Peter Upton, Royal Heritage tells the story of the Arab horse in Jordan, from the early days of the Bedouin tribes to the 21st century, a story closely associated with the Hashemite family of Jordan, direct descendants of the Prophet…

Co-authored by HRH Princess Alia, the eldest daughter of the late King Hussein of Jordan, and the artist and author Peter Upton, Royal Heritage tells the story of the Arab horse in Jordan, from the early days of the Bedouin tribes to the 21st century, a story closely associated with the Hashemite family of Jordan, direct descendants of the Prophet.

The account also tells of the Arab Revolt of 1916, in which the Emirs Ali, Abdullah, Feisal and Zeid, with T E Lawrence, drove the Ottomans out of the region, and how some of the Hashemite mares became the foundation stock of the Royal Stud in Jordan. Royal Heritage covers many other adventures including the traumatic events which nearly led to the loss of the Stud’s precious mares and describes how, despite these setbacks, the Royal Stud has flourished. In 1987 Princess Alia, Director of the Royal Stud, organised the first Arab horse show to be held in Arabia entitled ‘The Arab Horse at Home.’ It was an event which inspired other Arab countries to organise horse shows of their own.

Princess Alia includes many fascinating personal reminiscences: about the horses she holds so dear, the people involved in the Stud through the years, the famous and infamous, family and friends, heads of state and handlers. The work is richly illustrated with paintings, drawings and rare photographs from old archives and private collections, as well as up-to-date portraits of the Stud and its horses. Peter Upton gives an in-depth account of the horses themselves; the breeding, lineage and preservation of the hugely important Jordanian bloodlines.

A story of legend, romance and war, Royal Heritage tells with passion for the first time the remarkable saga of the Arab horse in Jordan.

HRH Princess Alia Al Hussein was born in 1956 to King Hussein and Queen Dina of Jordan. She is the President of the Jordanian Equestrian Federation and also works with charitable causes and organizations dealing with intercultural dialogue and understanding.

In 2009 she founded the Princess Alia Foundation to address issues relating to human and animal welfare and the environment. The Foundation follows a holistic approach and its message is ‘Compassion and Respect Towards All Creation’.

Find out more about the Princess Alia Foundation

Peter Upton studied art and art history at college and university, but considers that he really learnt more from his uncle, Charles W Cain, the well-known etcher of Arabia in the 1920s, and from studying the work of those artists he most admires, notably Stubbs, Munnings, Edwards, Sorolla and the Pre-Raphaelites.

Upton is best known for his paintings depicting the desert scene and the Arab horse. He has held one-man exhibitions in Britain and abroad, and his works, including many private commissions, are in private collections around the world.

A past President of the Arab Horse Society of Great Britain, an international judge, and a recognised expert on the history of the Arab horse, his passion for this breed goes back some 65 years to his first pony, a white part-Arab. He writes regularly for the AHS News and other magazines, has been involved in films on the Arab horse, and is the author of Desert Heritage: An Artist’s Collection of Blunt’s Original Arab Horses (1980), The Classic Arab Horse (1986), The Arabian Horse – History, Mystery and Magic (1998) Out of the Desert and The Arab Horse.

2 reviews for Royal Heritage: The Story of Jordan’s Arab Horses

Small Miracles: The Story of the Princess Alia Foundation

The Art of Falconry