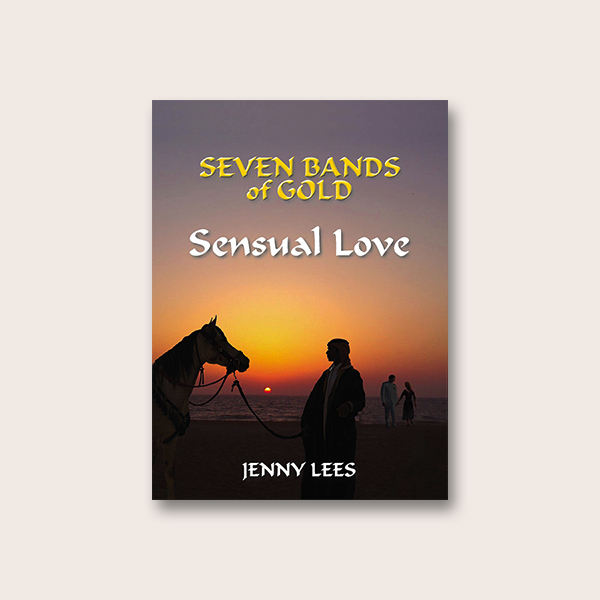 First Love saw Sally’s sexuality awakened; in Seven Bands of Gold Book 2: Sensual Love, the seductive Sheikh Abdullah takes her sex education to a new level – and the convent-educated and ill-prepared schoolgirl proves a fast learner! Torn between the comfort and security of her affair with the gentle Matt and the deep passions aroused by the experienced Sheikh, Sally imagines life could not get more complicated. But when a figure from her past casts his shadow over this curious ménage à trois, she realises how wrong she was…

It is 1968 and 19-year-old Sally Phillips has fled the UK for the Middle East in an attempt to heal her broken heart. Betrayal by her Scottish fiancé has made her suspicious of men and reluctant to trust them, but she remains in many ways naïve. She begins to adapt to life in the Sheikhdom of Al Khaleej, making friends and finding a job, and it is not long before she has become indispensible to her boss. So it comes as a shock one morning to find herself unceremoniously and inexplicably dismissed. Almost simultaneously, she is offered very different employment at the royal stables. Infuriated to learn that her sacking had been masterminded by a powerful man used to getting his own way, Sally hesitates to accept, but her finances leave her no choice. Incensed by the high-handed ways of the Kingdom’s Heir Apparent, but secretly delighted at the thought of working with his beautiful Arabian horses, Sally resolves to keep their relationship businesslike – however much her heart flutters when the handsome Sheikh is near.

Her new employer shows a keen interest in Sally. She find his attention embarrassing but, as their friendship develops, she discovers that beneath the power and authority lies a kindred spirit who yearns to live his life away from the spotlight. He demands that Sally treat him like any other man – and when she finds it difficult to use his first name he predicts that one day he will make love to her and that she will call it out in the throes of passion. Sally’s on-going relationship with the attractive Naval Lieutenant Commander, Matthew Rawlinson, makes her sceptical of this outrageous boast.

Born into an RAF family, jenny lees attended 12 schools in as many years. Her most vivid childhood recollections are of standing in front of classrooms of strange faces and being introduced as ‘This is Jenny, who has come to join us for a while’. But the nomadic upbringing gave her the chance to live and make
friends in many parts of the world. Her lifelong passion for horses, Arabians in particular, has in recent years become her life’s work. She lives with her husband and owns a stud of Arabian horses where she conscientiously preserves rare and precious bloodlines of the desert. Jenny became frustrated with novels whose love scenes ended on the wrong side of the bedroom door with ‘...’– thus the story of Sally Phillips began to gestate and, before she knew it, Jenny’s innate talent for storytelling had given birth to quadruplets.

Blue Jackal and other tales from Islamic lands: Audiobook