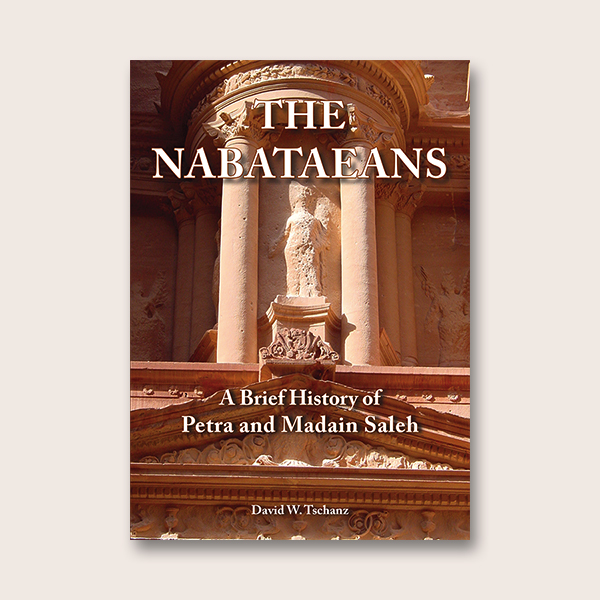 The Nabataeans were ancient peoples of Arabia, whose civilization was headquartered at Petra, ‘the rose red city half as old as time’. Their loosely controlled trading network covered the borderland between Syria and Arabia, from the Euphrates to the Red Sea…

The Nabataeans were ancient peoples of Arabia, whose civilization was headquartered at Petra, ‘the rose red city half as old as time’. Their loosely controlled trading network covered the borderland between Syria and Arabia, from the Euphrates to the Red Sea. Incredibly wealthy from trade, they were significant regional players. Herod Antipas, for example, was married to a Nabataean princess. The Roman emperor Trajan annexed the Nabataean kingdom in the beginning of the 2nd century AD. Their distinct culture, easily identified by their characteristic finely-potted painted ceramics, became dispersed in the general Greco-Roman culture and was eventually lost.

“The book is not intended as a substitute for any of the commercially available guidebooks on Petra. Instead it is meant to help the reader understand the whys, wherefores and whens of these fascinating people,” explains the author.

“What I wanted was a book that would relate Petra and Madain Saleh to the Nabataeans’ story in terms of present day scholarship. The problem with Nabataean history is that they left no records of their own and a lot of scholarly research is simply well informed educated guess work that has had to be revised several times.”

This new title will be published on the 200th anniversary of the first European to describe the historic Nabataean site of Petra by the Swiss traveller Johann Ludwig Burckhardt.What makes this book unique is that it will provide a popular and accessible account of the two major Nabataean sites: Petra in the Hashemite Kingdom of Jordan as well as its important sister city of Madain Saleh in the Kingdom of Saudi Arabia. Both are UNESCO World Heritage sites, and the author knows them intimately.

This book will provide visitors to both the Saudi Arabian and Jordanian sites more substance than found in a guidebook of listings and pictures. It should also appeal to students and anyone with an interest in one of the last great puzzles of history.

David W. Tschanz was born in Connecticut and moved to Saudi Arabia in 1989. He has advanced degrees in history and epidemiology and has been fascinated with Petra since the early nineties having written a series of articles and earlier booklet on the Nabataeans.

He has made over 40 visits to both sites including trips leading study groups. With over 950 published articles and eight books on topics ranging from military history to computer technology to ancient civilisations he brings an eclectic approach to his subjects.

Tschanz is the author of The Nabataeans: A Brief History of Petra and Madain Saleh.