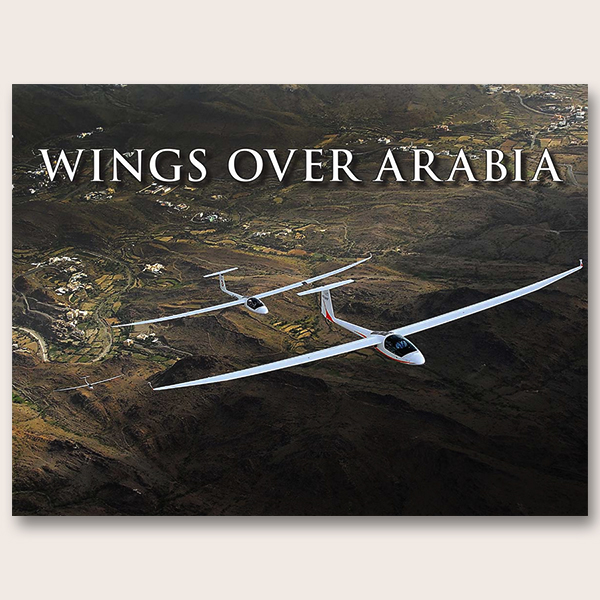 On 2 June 2006, a team of three gliders, one chase plane, support crew and all-terrain vehicles gathered at a fiercely hot and dusty airfield 50 kilometres outside Riyadh, the capital city of Saudi Arabia. The pilots, two Saudi princes and the British ex-Special Forces officer who had trained them, were about to make gliding history…

On 2 June 2006, a team of three gliders, one chase plane, support crew and all-terrain vehicles gathered at a fiercely hot and dusty airfield 50 kilometres outside Riyadh, the capital city of Saudi Arabia. The pilots, two Saudi princes and the person who had trained them on the Stemme gliders to be flown, were about to make gliding history by flying in a great circular route round the western half of Saudi Arabia over some of the harshest and unforgiving desert terrain in the world.

In Wings Over Arabia, Roger Harrison, writer, photographer and long-time resident of the Kingdom, chronicles this modern version of a ‘royal progress’ over the wild and desolate deserts, the Red Sea coast and the mountainous south-western region of the Kingdom.

The stunning photographs – many unique since the flight paths passed over areas never before or since open to non-military aircraft – are accompanied by entertaining text on every step of this unique journey. Additional narrative and ground-level photos of the features below the gliders supplement many of the aerial sequences.

This first-hand account of a historic and often dangerous exploit constitutes a unique document and is essential reading for everyone with a love of adventure or an eye for beauty. It will appeal to aviators, photographers, geographers, travellers and teachers – and all those who hold Saudi Arabia dear, be they nationals, visitors or ‘old Saudi hands’ who having lived and worked in the Kingdom reflect on their time spent the Islamic holy land with fondness.

“Lawrence of Arabia captured it from a camel. Roger Harrison captures it from the air. Both convey the magic of Arabia with breathtaking power.”

Robert Lacey, author of Inside the Kingdom

“What an absolutely fantastic book. Amazing photographs and other illustrations, and clean crisp text.”

After ten years in Saudi Arabia, first as a teacher then as Senior Reporter for the Arab News, Roger Harrison was invited to join an historic expedition to prove the possibility of introducing gliding as a sport in the Kingdom.

Writer, photographer and enthusiast of adventure sports, Roger’s motto is “everybody dies, but some never live”. In 2002 he enthusiastically grabbed the chance to join two Saudi Princes in a genuine first. The unique opportunity to fly over parts of Saudi Arabia hitherto restricted to civilians led to the coalescence of three of his great loves – flying, photography and the written word – into Wings Over Arabia. He is currently building a library of photographs as a record of the Kingdom for future archiving.

He has a long-suffering photographer son and lives in Jeddah with an incredibly tolerant wife, Sian, and a number of uninvited cats.

His hobbies include diving, singing, cooking, reading and pursuing trifles of esoteric information.