“If you were one of the half a million music fans who made their way like raggle-taggle gypsies to the Isle of Wight Festival 1970, you will absolutely love this backstage look at a great moment in rock history.”
Ray Connolly, Daily Mail

The Isle of Wight Festival in 1969 famously ‘stole Bob Dylan from Woodstock’ and was the starting point and benchmark for all rock and pop festivals in the UK.

What followed in 1970 was one of the world’s greatest music gatherings of all time, attracting musicians and fans from across the whole musical spectrum. The list of performers is a Who’s Who of the then music élite, who are now legends: Jimi Hendrix, Miles Davis, the Who, Joan Baez, Richie Havens, Joni Mitchell, Procul Harum, the Doors, Leonard Cohen, the Moody Blues, Emerson Lake and Palmer – the list goes on. This was Britain’s ‘Woodstock’ and all on a tiny island off the south coast. It would also be Hendrix’s last major performance – 17 days later he was dead.

Many remember this festival as a magical, life-changing experience, encapsulating the sixties trip of sex, drugs, rock’n’roll and a political yearning for a better world. But for others, a question looms large over the history: did this final festival help precipitate the end of the dream of an alternative society, or did it reflect the changes already taking effect?

Ray Foulk, now based in Oxford, has fostered many passions since his early days as a promoter. After the dizzy heights of the Isle of Wight Festivals and stadium events in London, the Foulk brothers were head-hunted by the Milton Keynes Devel­op­ment Cor­po­ra­tion to help plan the leisure content of their new city. Through this Ray brought the inventor/scientist/designer Buck­min­ster Fuller, to the project, embraced his envi­ron­men­tal­ism, and even­tu­ally trained as an architect himself at the Uni­ver­sity of Cambridge. Combining design, education and promotion he spent much of the nineties and noughties as an envi­ron­men­tal cam­paigner, and led the ambitious in-schools project, Blue Planet Day, rekin­dling the sat­is­fac­tion, and more, that the festivals had brought to his youth. Recent years have been dominated by envi­ron­men­tal archi­tec­ture and writing.

Caroline Foulk has worked with her father, Ray, for many years, research­ing, writing, and co-promoting the schools envi­ron­men­tal project, Blue Planet Day. Recently, together they have completed a screen­play for the cinema about the invention of modern art. Caroline trained and worked as a teacher and lives in Oxford with her husband and three children. 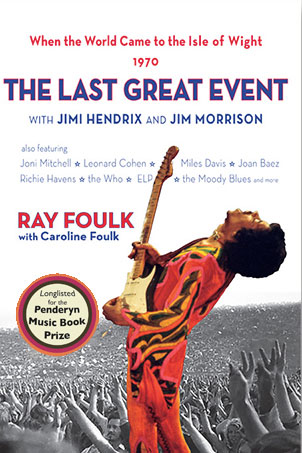