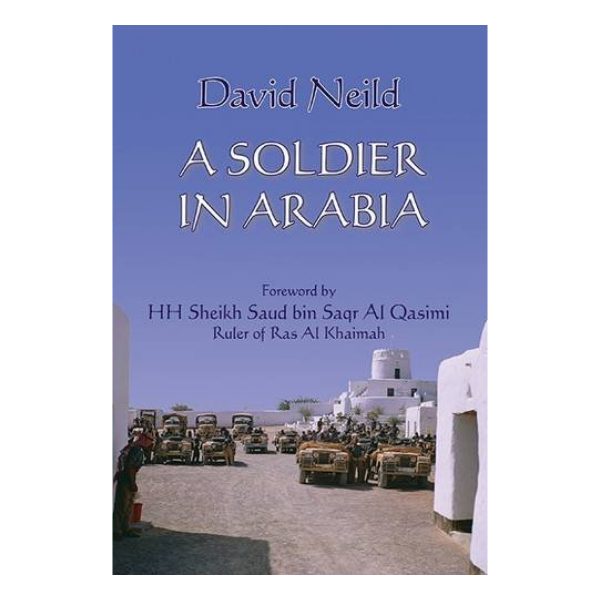 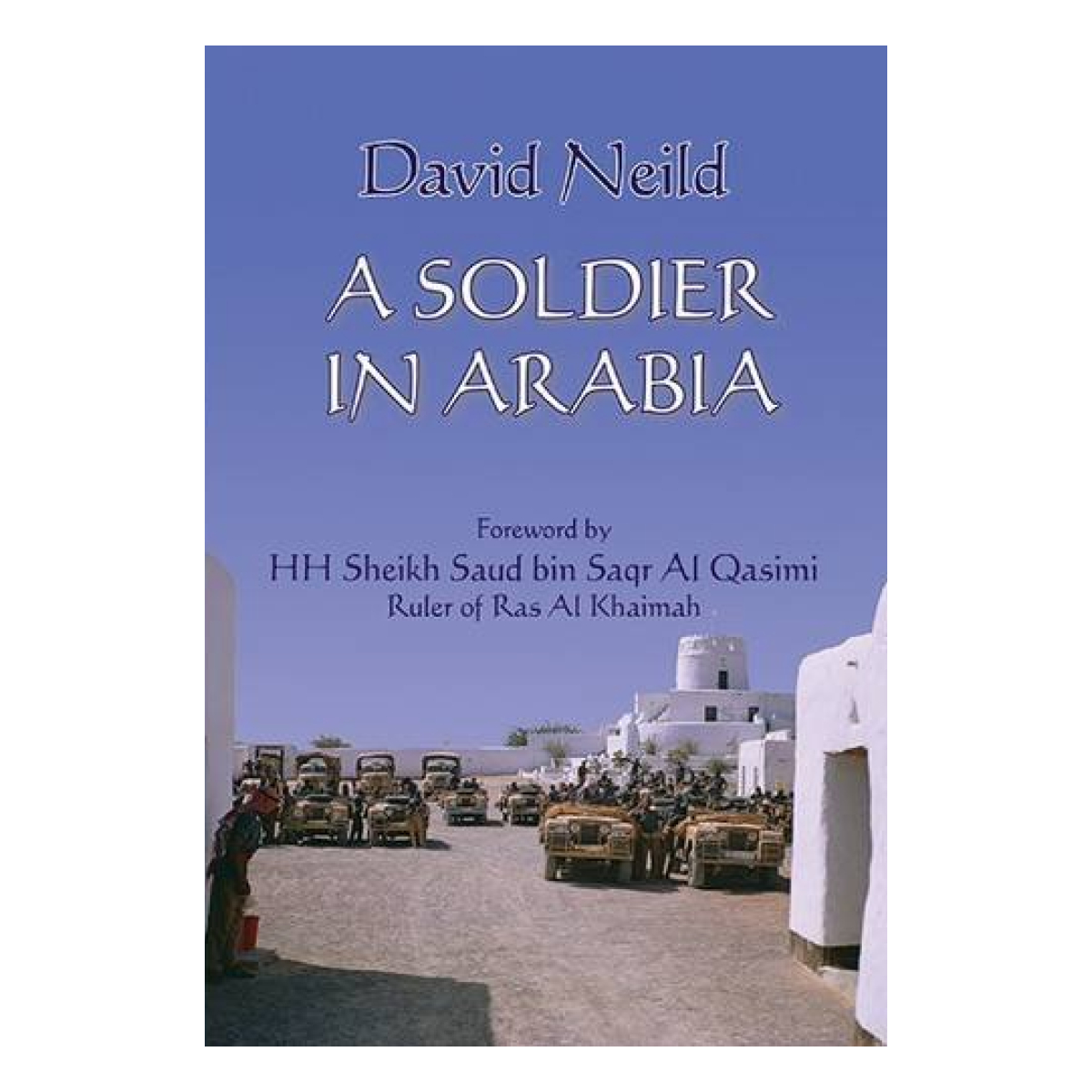 A Soldier in Arabia reveals the behind-the-scenes story of the events which led up to and followed the creation of the present-day United Arab Emirates in December 1971 followed, a few months later, with Ras Al Khaimah joining the Federation. Soldier and adventurer David Neild was the youngest officer to serve in the legendary Trucial Oman Scouts when he joined them at the age of only 20 in 1959.

In 1968 Sheikh Saqr bin Mohammed Al Qasimi, the Ruler of Ras Al Khaimah, with whom Neild had formed a good working relationship, called on Neild to set up and command a national defence force for the Sheikhdom, with the rank of Lt Colonel. In hardback.

The account of Neild’s career in Arabia is set against the backdrop of unrest and uncertainty and the emerging national politics of the day.

It is both a valuable historic record as well as an entertaining and honest account told with empathy, and in the lean, objective style of a military man who, on a daily basis, had to balance the need for rapid political, strategic and tactical decisions with respect for the traditional ways of a complex tribal Arab culture.

The evidence of his success is revealed through the enduring relationship that has been forged with HH Sheikh Saud bin Saqr Al Qasimi, son of the founding Ruler and his former employer, as well as the continuing presence and strength of both the Ras Al Khaimah and Sharjah Defence Forces.

A Soldier in Arabia is a unique first-hand account of a life lived to the full during a significant period of history on the Arabian Peninsula.

The author writes with understanding and insight of the sheikhs and soldiers, statesmen and scoundrels encountered along the way.

Part memoir, part history, but always full of adventure, this compelling account will provide the reader with a better understanding of a part of the world frequently misunderstood by outsiders and an appreciation of the remarkable man who earned the lasting respect of both the leaders he served and the soldiers he led.

David Neild was born in Portsmouth in 1938, the second son of a Royal Naval Officer. At Portsmouth Grammar School he concentrated more on the combined cadet force and sport rather than his academic studies and was already considering a military career when he was called up for national service in 1957. A year later he was commissioned into the Royal Army Service Corps and posted to Singapore. Exciting as this turned out to be, his preference was for the more active military career of an infantry officer.

In 1959 he joined the the elite Trucial Oman Scouts comprising of British and Arab soldiers. At the age of 20 he was the youngest officer ever to serve in the TOS and it marked the beginning of a remarkable Arabian journey that was to change his life for ever.

After completing his 18-month tour of duty, Neild transferred to the Kings Regiment (Manchester and Liverpool) and saw service in Kenya, Berlin and Northern Ireland. He then returned to the UK as second-in-command of the Recruit Training Company at the Lancastrian Brigade Depot in Preston. A brief romance with a Coronation Street actress led to the offer of a job with a Granada TV news team. However, a return to the Trucial Oman Scouts was offered and the call of Arabia proved too strong.

In the years between 1966 and 1972 he rose from Captain to Lt Colonel and was witness to and often closely involved in the skirmishes, incursions and political upheavals that took place leading up to the formation of the United Arab Emirates in December 1971. He commanded the first Trucial Oman Scouts rifle squadron to be based in Ras Al Khaimah where he formed a lasting friendship with the Ruler, His Highness Sheikh Saqr bin Mohammed Al Qasimi. This relationship was further strengthened when his squadron was successful in peacefully putting down a tribal rebellion in Ras Al Khaimah. Towards the end of 1968 HH Sheikh Saqr took the decision to establish his own independent Mobile Force and invited Neild to form and command it, provided he left the British Army. This was an offer he found impossible to refuse and he spent the next three years establishing a fully trained efficient force.

In 1972 the Ruler of Sharjah, Sheikh Khaled bin Mohamed al Qasimi was assassinated and Neild was asked to form and command the Sharjah National Guard. In 1973 Neild left the Gulf for Africa (the subject of his next book) but again the lure of the desert proved too strong and 2013 he returned with his wife, Eileen, to the United Arab Emirates where he resides today.

He is married with one daughter and two granddaughters and still enjoys a game of golf, despite an ever increasing high handicap.

The Caravan Goes On: How Aramco and Saudi Arabia Grew Up Together – Paperback