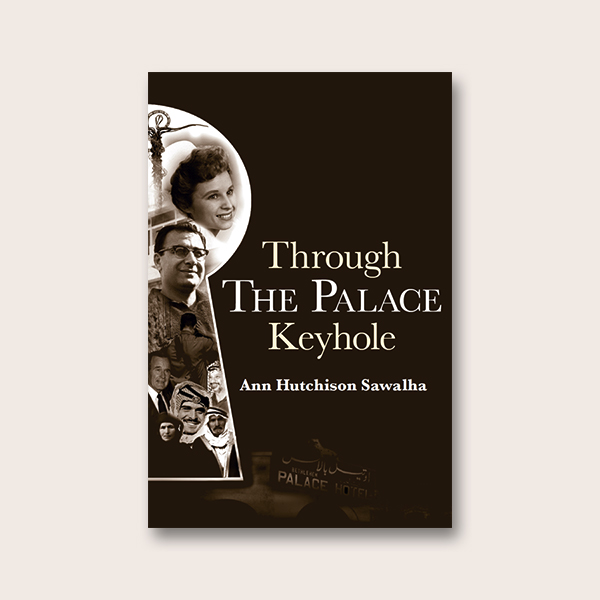 Through the doors of The Palace Hotel came a succession of well-known faces, including many of the power brokers and éminences gris of the Middle Eastern conflict. Ann Sawalha tells the remarkable story of her life, including dealing with the cultural and linguistic challenges, Israeli occupation and political upheavals.

In hardback and paperback.

From the Arab world comes a story of the love between an Arab man and an American woman which lasted more than half a century. In 1958, Sami Sawalha took his young bride to his Jordanian homeland. Uprooted from all that was familiar to her, Ann faced the cultural and linguistic challenges head on and began to assimilate herself into her husband’s tribe – a proud and ancient Bedouin people who trace their roots to before the coming of Islam. Building up the family hotel business on both sides of the Jordan River posed even greater challenges: the lack of privacy in living cheek by jowl with relatives in half-built hotels, bringing up a family under Israeli occupation, constantly under threat during the on-going strife in the region, the shortage of basic amenities and services, and their love repeatedly tested by their own contrasting cultures and attitudes. As their business prospered, through the doors of The Palace Hotels came a succession of well-known faces, including many of the power brokers and éminences gris of the Middle Eastern conflict. Ann Sawalha, an accute observer of human nature, tells the story of her life with Sami with love and humour. Set against the backdrop of the momentous political upheavals of the late 20th and early 21st centuries, it is a compelling memoir. The family’s hotels survive as a tribute to Sami’s dreams and strength, and Ann’s unwavering determination to support him.

Born in Pontiac, Michigan in 1935 and raised in Detroit, Ann Sawalha met Sami in 1956 at the hospital where she was training to be a nurse. After graduating, and until their marriage, she worked as a surgical nurse in urology. In March 1959, Ann and Sami left America in its post-war golden age to go to the Middle East.

It was a time when air travel was rare, telephone connections were relayed by appointment, and the region was underdeveloped. On her arrival in Jordan Ann was introduced to her husband’s large Arab Christian tribe, the Azzizat, and began to learn about their heritage, culture and customs. Sami entered the family hotel business and during their 53-year marriage they lived in three of the five Palace Hotels owned and operated by the family on both the east and west banks of the River Jordan.

Ann’s nursing qualifications proved useful in Jerusalem after the June War of 1967, where they lived for 18 years, raising their children under Israeli occupation.

The frustrations and uncertainties of life in occupied Jerusalem prompted Sami to build two hotels in Amman, where they eventually moved in 1982. Ann has looked through the various Palace keyholes at the culture, religion, war, politics, business and family that have surrounded her. Her life with family unfolds simultaneously with the tumultuous events of a region in crisis and transition.

Ann’s beloved Sami died in 2011, but she continues to live in Amman, Jordan. She is mother to Leah, Lenna, and Hanna and grandmother to Rawan, Shereen, Sami, Nadine, and Rakan.

2 reviews for Through the Palace Keyhole