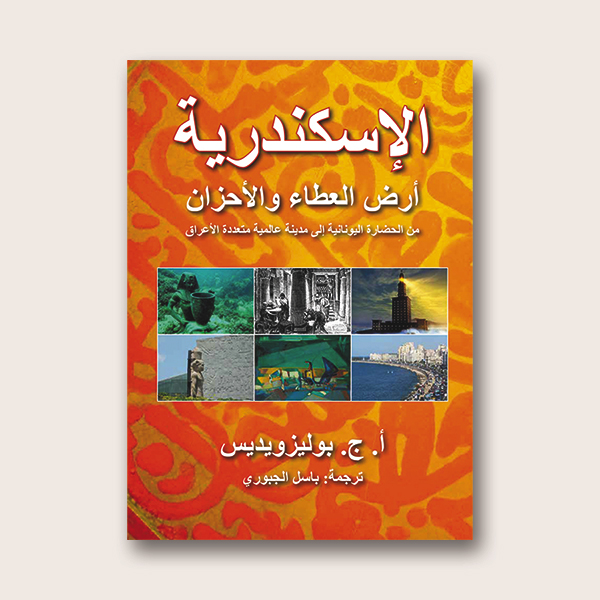 Alexandria: City of Gifts and Sorrows was first published in English in 2014 and received critical acclaim. This new Arabic edition takes the reader on an historical journey from the third century to the multiethnic metropolis of the twentieth century, bringing together two diverse histories of the city.

In hardback and paperback.

Ancient Alexandria was built by the Greek Macedonians. Ptolemy started the dynasty and in thirty years completed the first lighthouse, and the grand library and museum, which functioned as a university with an emphasis on science, known as “The Alexandrian School”. Scholars attended as “the birthplace of science” from all over the ancient world. Two of the most eminent were Euclid, the father of geometry, and Claudios Ptolemy, writer of The Almagest, a book on astronomy. These are the oldest surviving science textbooks. Herein there are stories about scientists, poets and religious philosophers, responsible for influencing the western mind with their writings.

Modern Alexandria was rebuilt in 1805 by multi-ethnic communities who created a successful commercial city and port with an enviable life-style for its inhabitants for 150 years. In 1952 the Free Officers of the Egyptian Army masterminded a coup to free the country from the monarchy and British domination. In 1956 the socialist regime under Colonel Gamal Abdel Nasser closed the Suez Canal, resulting in the Anglo-French-Israeli invasion. This outburst of Egyptian nationalism and military revolution by this understandably anti-Western regime included the confiscation of property belonging to foreigners and the subsequent mass exodus of business and artisan classes that hitherto had made the city so successful. The author was an eye-witness to these events and he sets out the political errors and failures of both Egyptian and Western leaders. The legacy of the resulting political and social confusions is deeply apparent in the continuing unrest in the Middle East, and in particular in Egypt.

A.J. Polyzoides was born in Alexandria, Egypt, of Greek Macedonian parents. As a youth he walked the city’s avenues and coastal promenade searching for remains of the Greek Ptolemaic city, the absence of which sparked a life-long interest in ancient Alexandria. After the military revolution, the Suez Canal War and the exodus of the foreign communities, he moved to the UK where he trained in trauma and orthopaedics, retiring as Consultant and honorary senior lecturer at Birmingham University. He now lives on an island in the Aegean, and continues research on his birthplace, the illustrious ancient city.