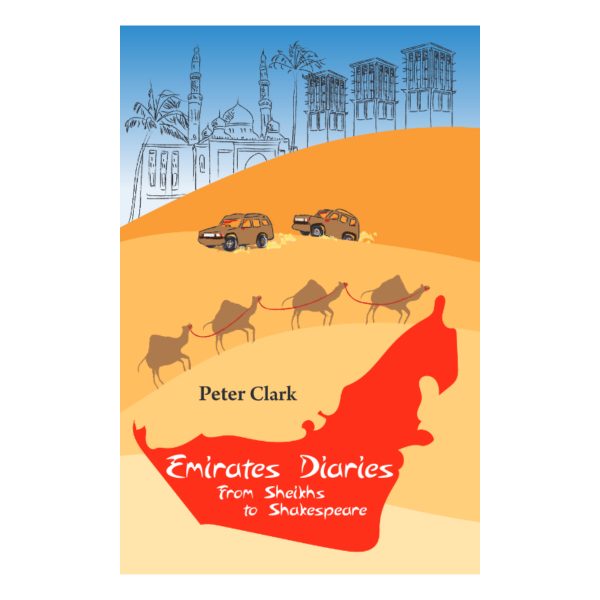 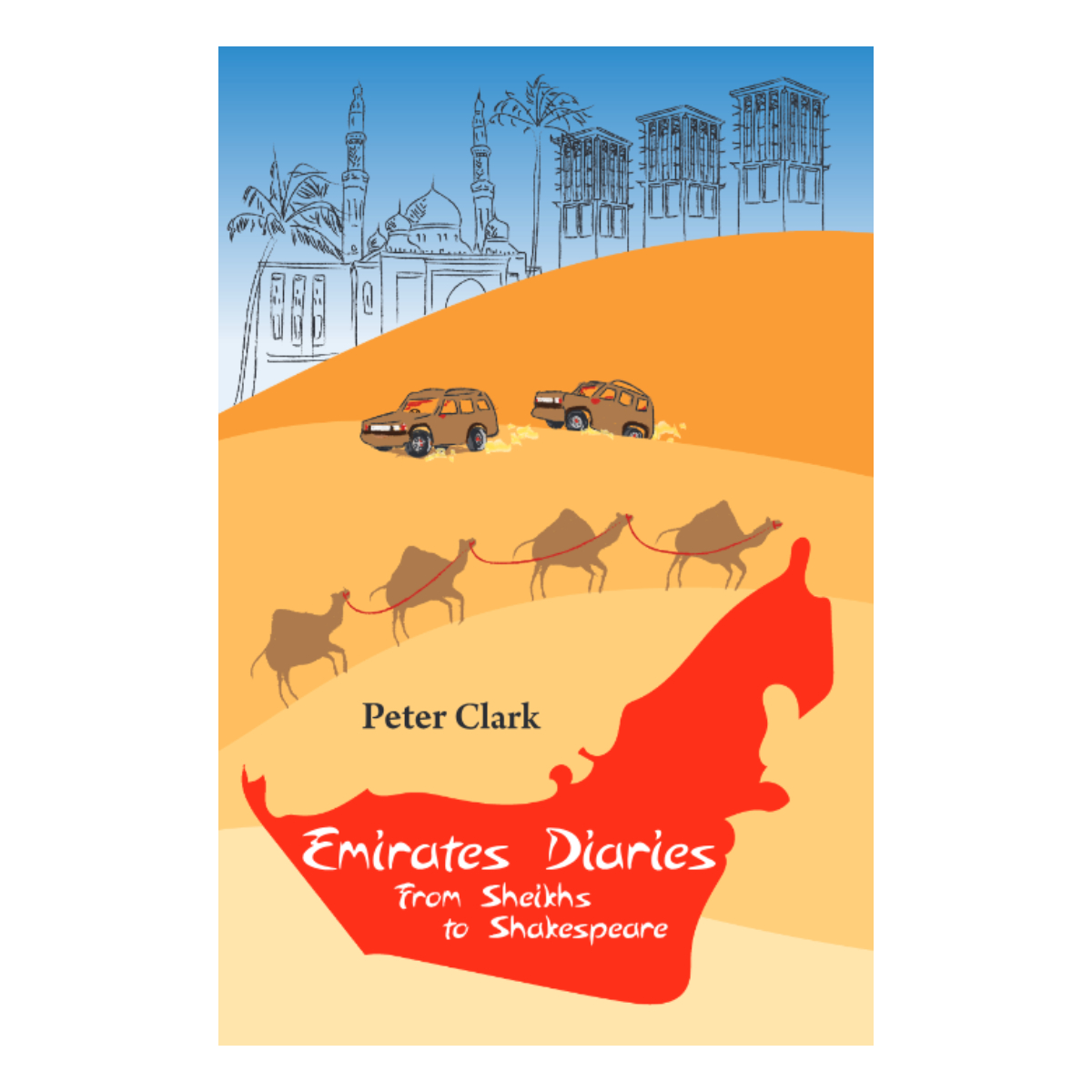 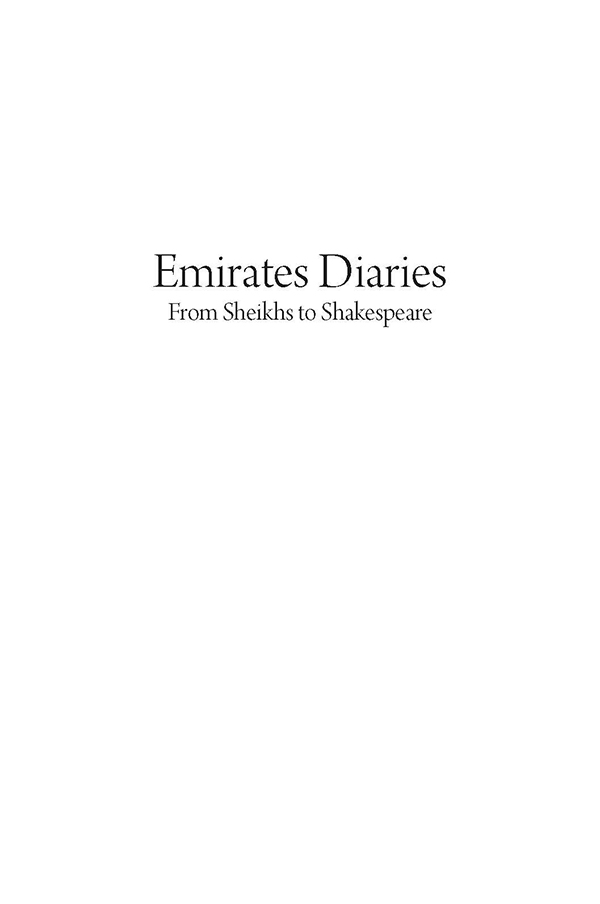 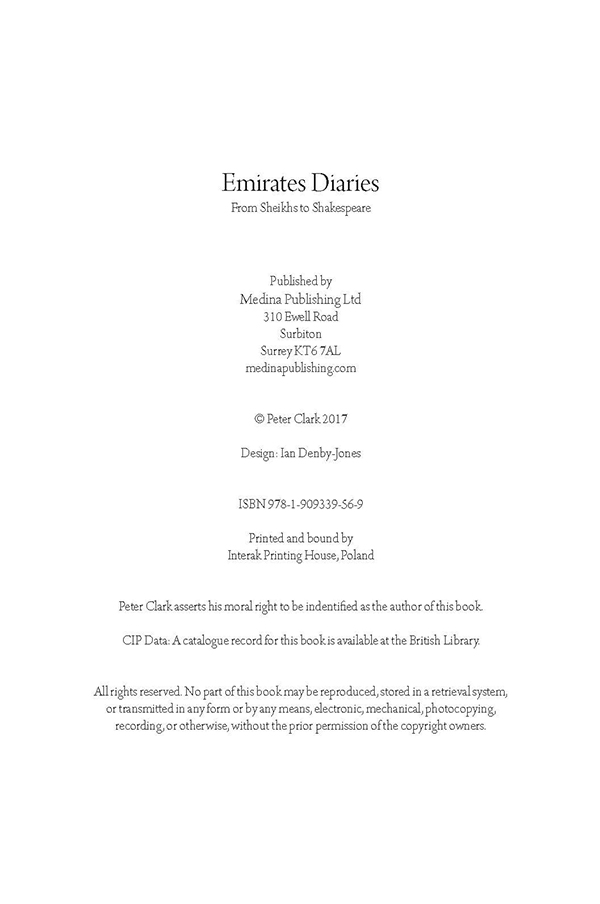 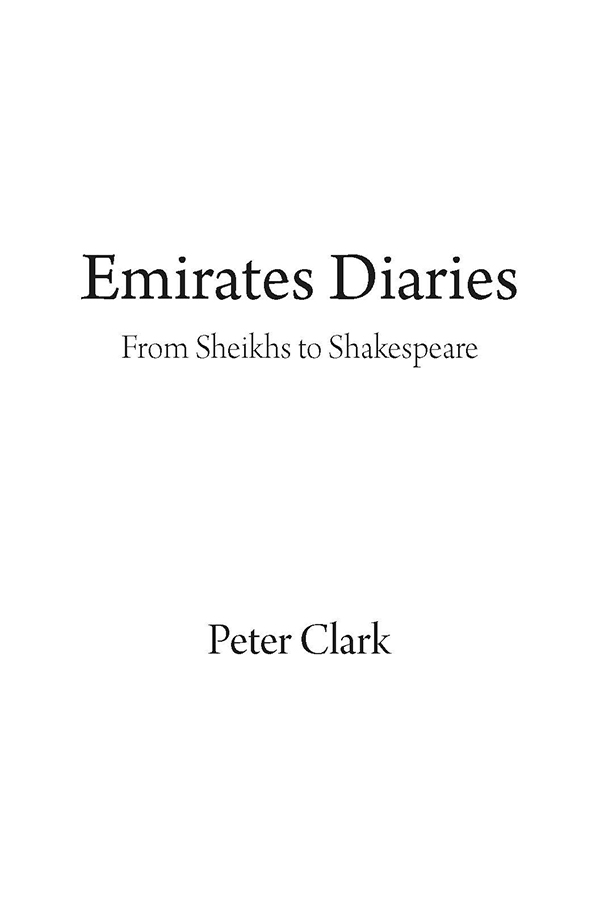 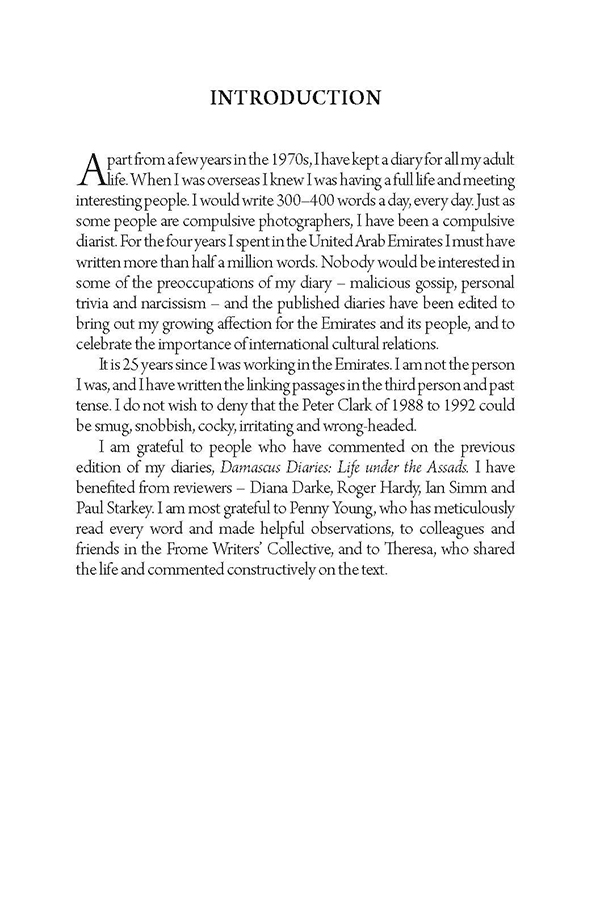 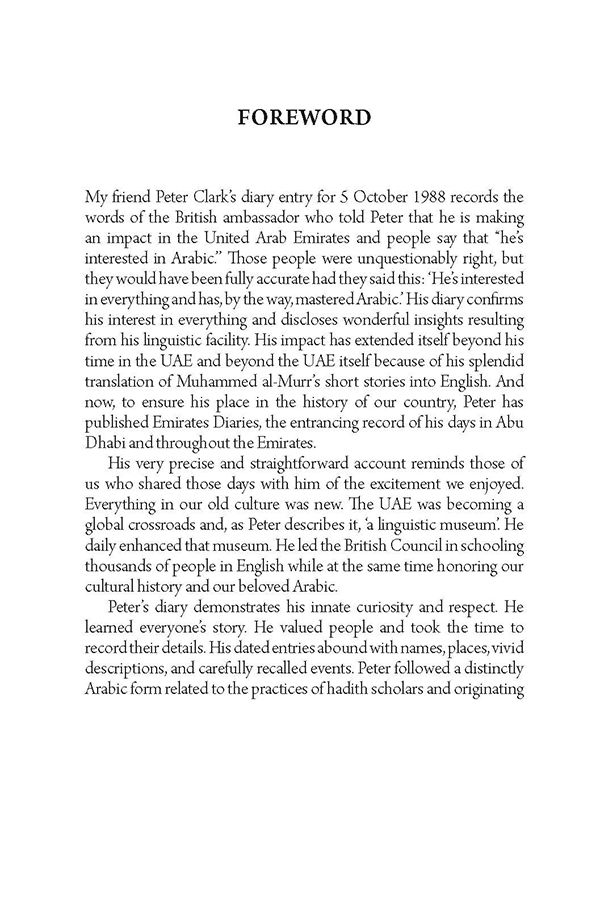 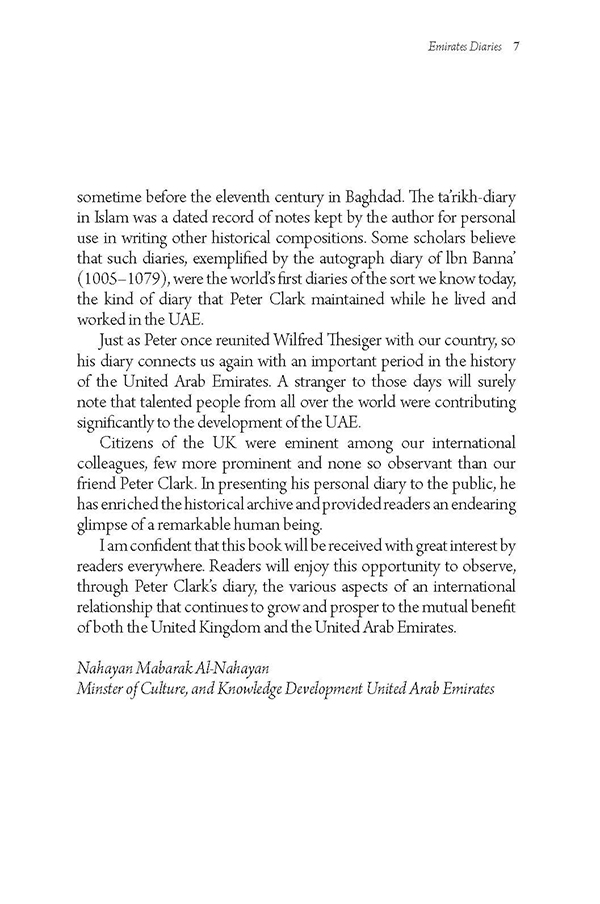 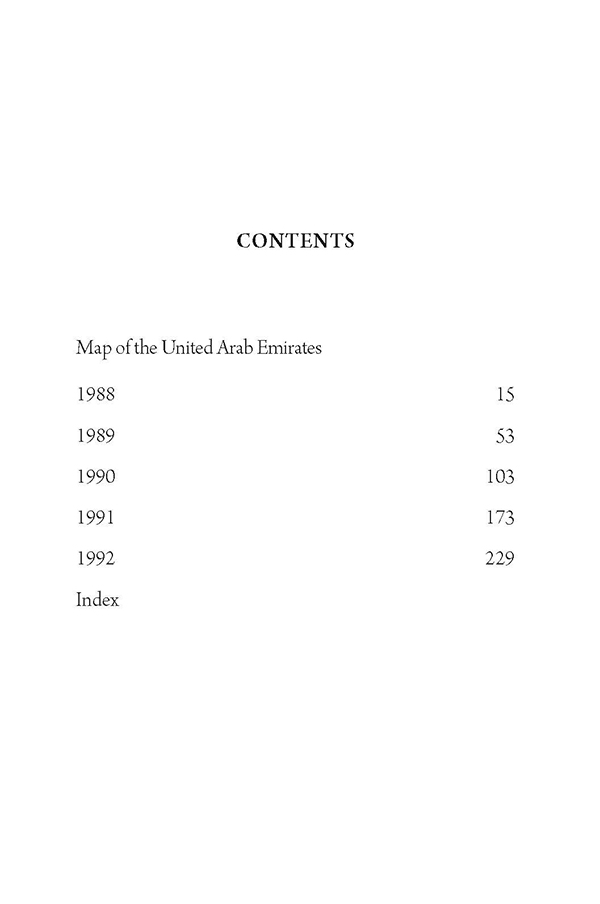 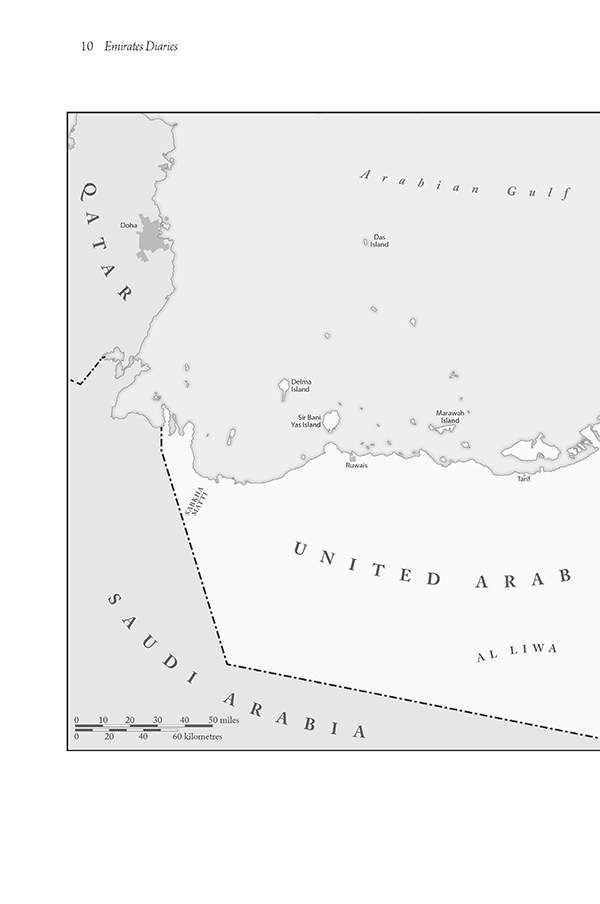 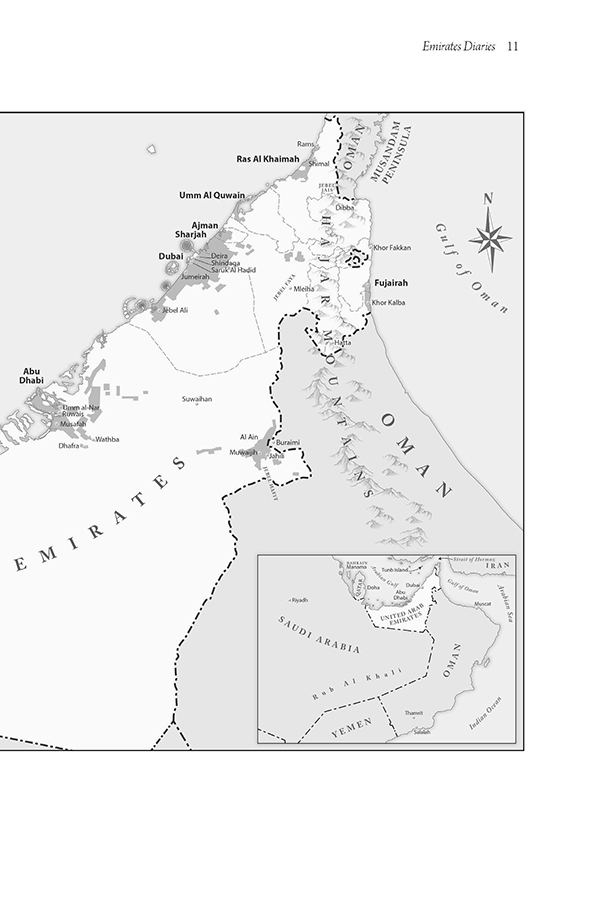 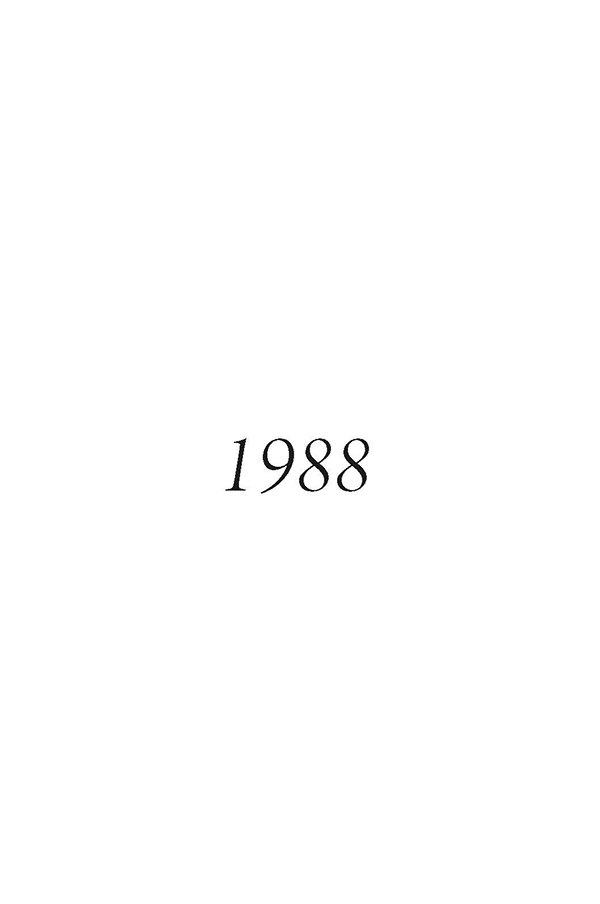 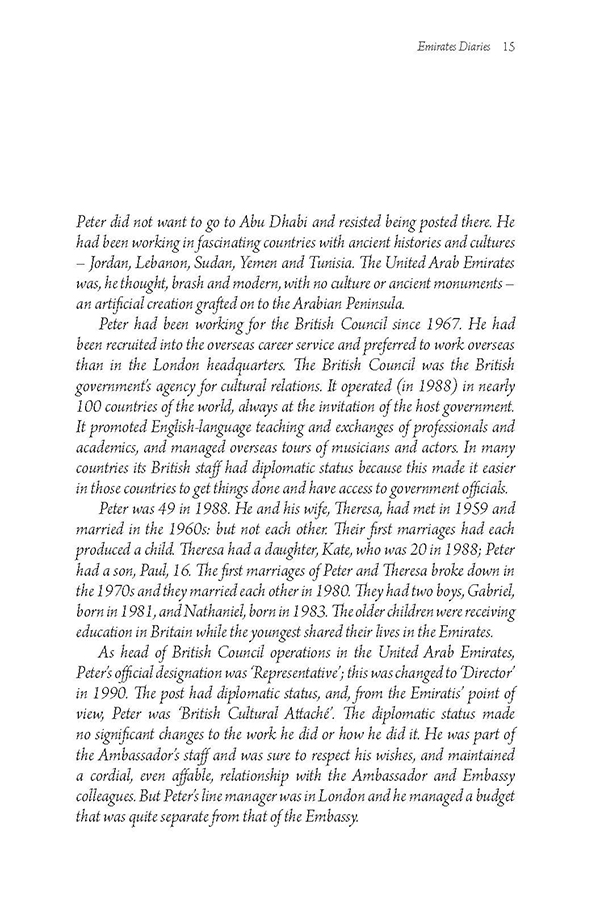 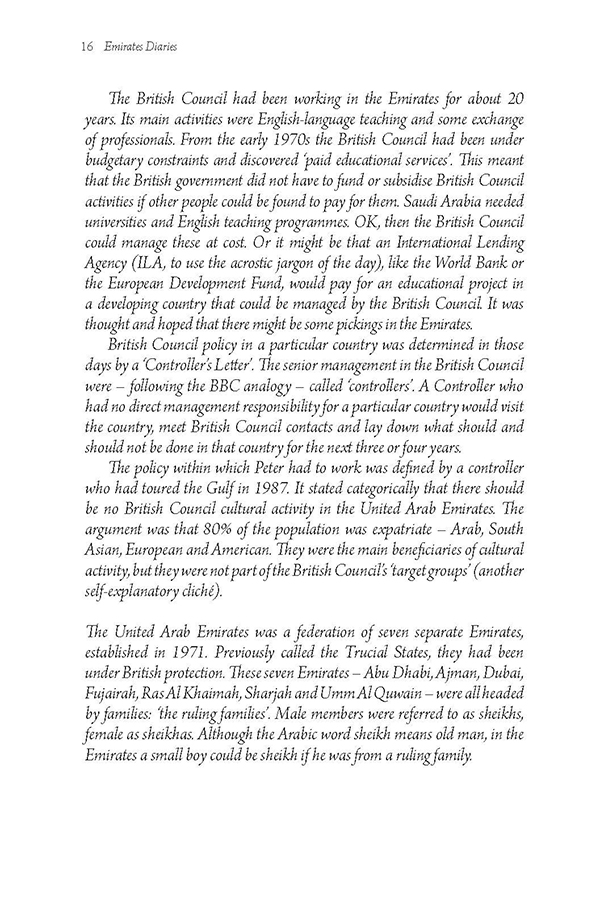 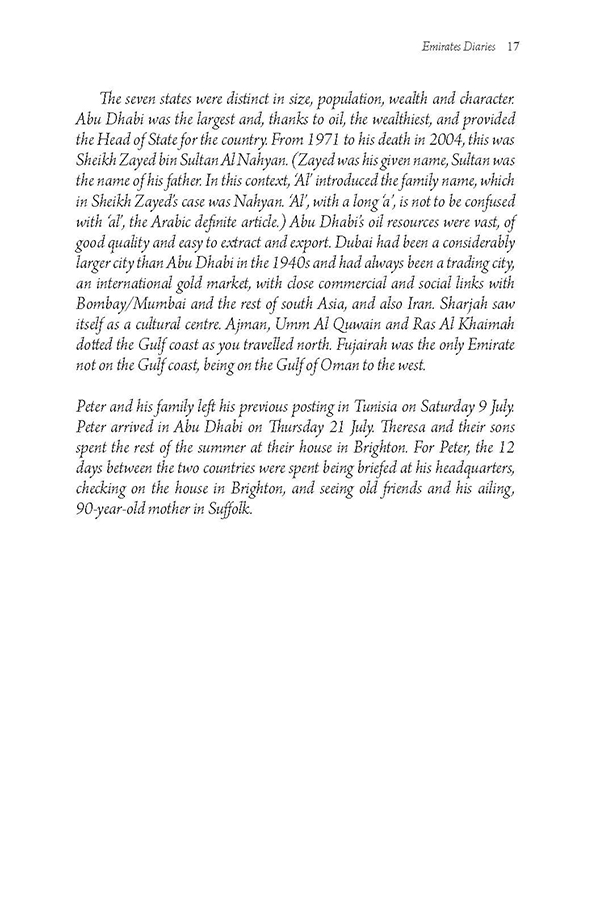 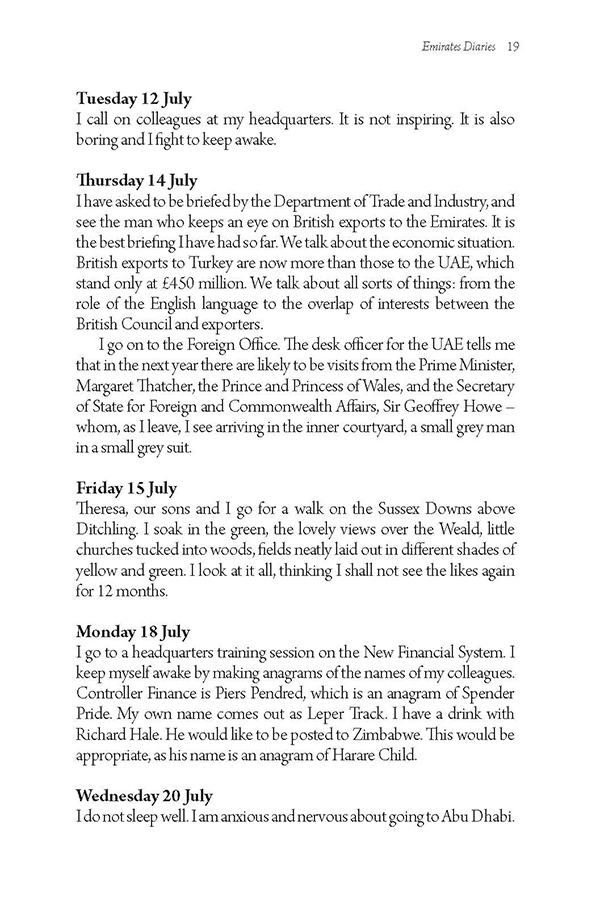 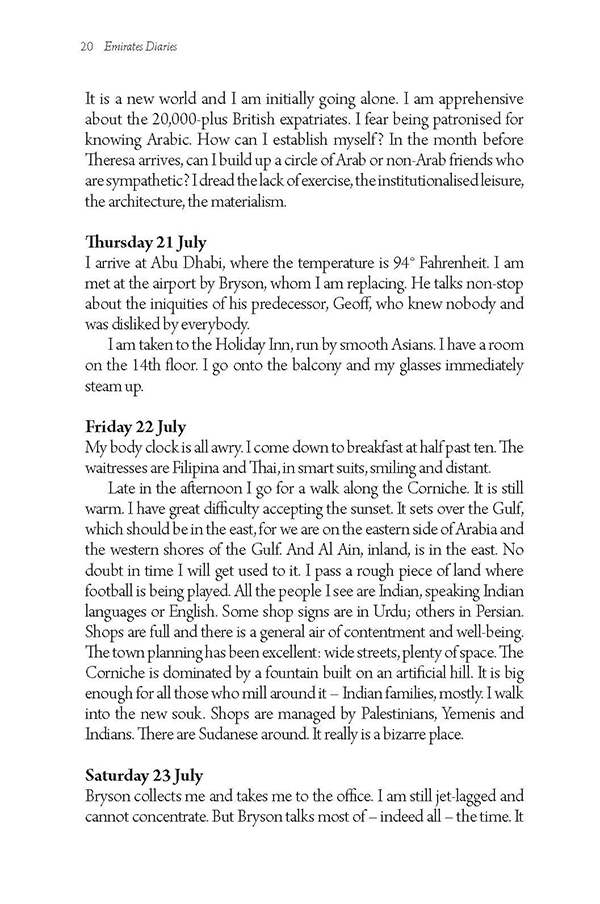 Peter Clark was a romantic. He did not want to be sent to Abu Dhabi in 1988 to run the British Council in the United Arab Emirates, a country which he felt was brash, consumerist and lacking in history. He preferred established countries, steeped in history with ruins and antique architecture. Cover illustration by Chess Heward .

In ebook and paperback.

Emirates Diaries: From Sheikhs to Shakespeare tells the story of how Peter came to love the Emirates and its people. He got to know Abu Dhabi sheikhs and Dubai merchants and people at every level of society. The country was on the cusp of enormous economic expansion and this book is an affectionate picture of the Emirates when it was still like a chain of large informal villages. The people of the United Arab Emirates were aware of their good fortune and were, he found, open, generous and innovative. Clark arranged for the explorer Wilfred Thesiger to return to the country he had celebrated before it became oil-rich. Thanks to Peter, Thesiger met up with his old companions who had accompanied him in crossing the Empty Quarter 40 years earlier. Peter embedded himself in the local cultural scene and translated stories by Dubai’s best known writer, Muhammad al-Murr. Emirates Diaries tells of opera in Ras Al Khaimah, how Shakespeare was brought to large audiences of young people, how to organise a royal visit, an outbreak of foot and mouth disease among the oryx in the Al Ain zoo, the culture of camel racing and an unpaid bill left by Margaret Thatcher. The diaries sparkle with mischievous humour and acute observation. This book is a prequel to Peter Clark’s Damascus Diaries: Life under the Assads, described by The Economist as ‘quirky, digressive and indiscreet’.

Dr Peter Clark OBE is a writer, translator and a travel and cultural consultant. He has known, travelled, worked and lived in the Middle East for over 50 years, has translated eight books from the Arabic, and written and edited more than a dozen other books. An authority of the culture of all countries of the region, he has led cultural tours to Turkey, Syria, Lebanon, Egypt and Iran. His Marmaduke Pickthall: British Muslim, first published in 1986, was reissued in 2016 and has been translated into Arabic. Other books include Istanbul: A Cultural History, which has been translated into Italian, Thesiger’s Return and two books on places associated with the life and creations of Charles Dickens. Peter worked for over 30 years in seven Arab countries for the British Council, designed the International Prize for Arabic Literature and has been a Contributing Editor of Banipal, the Magazine of Arab Literature since 1998. Peter is married, has three grown up sons and a step-daughter and lives in Somerset. His hobbies are opera and marathon walking.

1 review for Emirates Diaries: From Sheikhs to Shakespeare