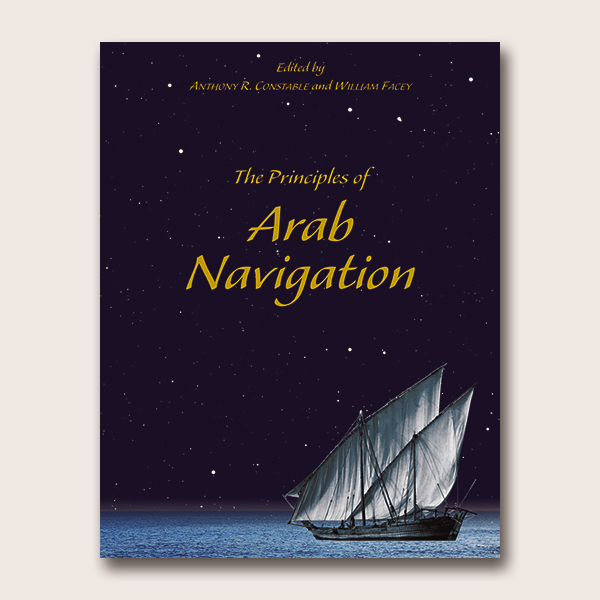 The Principles of Arab Navigation is an entertaining and informative look at how the Arab, Persian and Indian communities have navigated their way across the seas in search of adventure and better trade routes. Compiled by six of the best scholars specialising in maritime and Arab culture, this book is a must-have for nautical enthusiasts.

Throughout history, the Indian Ocean has been a zone of interaction between far-flung civilizations served by ports, and connected with the Mediterranean by the Gulf and Red Sea. The shows that were the vehicles of commercial and cultural exchange over this vast expanse of ocean ranged from small craft rarely venturing out of sight of land, to cargo vessels carrying navigators skilled in the art of deep sea sailing. These Arab, Persian and Indian seamen used the seasonal monsoon winds, and applied navigational techniques that relied on their ability to read the stars in the night sky, skills that had developed down the generations from time immemorial. This stellar navigation, based on measuring the altitude of the Pole Star to establish latitude and on the risings and settings of certain stars to find direction, grew into a complex art, belying the simplicity of the instruments used. Bringing together six scholars specializing in the maritime history and culture of the Arabs (Anthony R. Constable, William Facey, Yacoub Al-Hijji, Paul Lunde, Hassan Salih Shihab and Eric Staples), this book makes a new and vital contribution to the study of a nautical culture that has hitherto not received its due share of attention, and which is vital to an understanding of Indian Ocean history. Drawing on source material such as the guides by the renowned southern Arabian navigators Ahmad ibn Majid and Sulayman al-Mahri in the 15th and 16th centuries AD, as well as surviving logbooks of how captains in the early 20th, the volume covers the principal ideas, techniques, instruments and calculations used, deploying astronomy, geometry and mathematics to explain their methods. It includes an account of a practical attempt to apply these methods in 2010, on an adventurous voyage from Muscat to Singapore in a reconstructed early medieval dhow, and concludes with an analysis of sailing conditions in the Red Sea.

William Facey began his career as a classicist at Oxford and has emerged as a leading historian of the Arabian Peninsula. For many years he has worked as a consultant on museum projects in the Arabian Peninsula, particularly in the archaeology, history and people of the individual nations. He has also been involved in planning museums and exhibitions in England, Europe, Central America and the Far East.