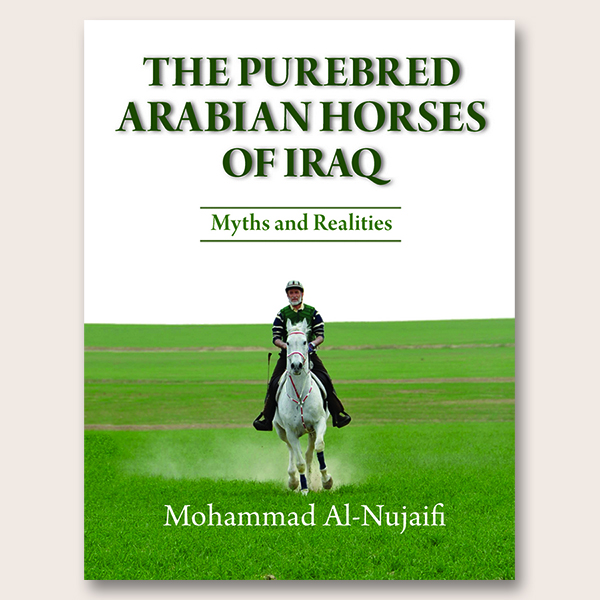 For the first time, the story of Iraq’s purebred Arabian horses is recounted in words and pictures by a prominent Iraqi whose family has been breeding horses for generations, since the family migrated north from Arabia with their prize horses to settle on the grasslands around Mosul in northern Iraq in the 17th century.

For the first time, the story of Iraq’s purebred Arabian horses is recounted in words and pictures by a prominent Iraqi whose family has been breeding horses for generations, since the family migrated north from Arabia with their prize horses to settle on the grasslands around Mosul in northern Iraq in the 17th century.

Dr Mohammed Al-Nujaifi has a deep understanding of the purebred desert Arabian horse, its origins, history and qualities, and his narrative corrects the Western-held belief that Arabian horses were bred and admired primarily for their beauty. It is speed, he argues, that has always been the essential characteristic sought and developed over millennia by the Arabs. The recent resurgent interest in Arabian horse racing, not only throughout the Middle East but in Europe and North America, is testimony to this truth.

Mohammed Al-Nujaifi has taken a leading role in encouraging the sport of Arabian horse racing and currently owns, trains and races more than fifty prize-winning Arabians. In 2010 and 2011, according to statistics of the International Federation of Arabian Horse Racing Authorities (IFAHR) he was ranked as the world’s number one Arabian racehorse owner.

The book begins with the origins of the Arabian horse in pre-Islamic history and brings the story  up the present day, and includes the history and current status of flat racing in Iraq. The final chapter focuses on the influence of the Iraqi Arabian on breeding programmes around the world.

Richly illustrated with recent photographs and many hitherto unpublished and historic images, the author writes with passion about the Arabian horses of Iraq, of the challenges faced by the breed in recent turbulent times and presents a unique and informed Arab perspective of the qualities of the purebred desert Arabian horse, one that is sure to spark controversy and debate among Western enthusiasts of the breed.

Dr Mohammad Bin Abdulaziz Al-Nujaifi’s family have been breeding horses since the family arrived in Arabia in 1638. Keeping the tradition going at their stud farm in Mosul has not been easy – the wars and internal strife of the country have taken their toll – but horses have remained an abiding passion throughout his life.

Dr Al-Nujaifi, the Chief Advisor to the Speaker of the Iraqi House of Representatives, has a Doctorate in Agriculture from Oxford University and divides his time between Iraq and Europe. He has a property management company in the UK where his children attend school.

The owner of many successful purebred Iraqi Arabian racehorses, he is often to be found in winner’s enclosures at home in Iraq as well as at major race courses, particularly in the UK, Sweden, France, Saudi Arabia and other Gulf States.

The breeding of Arabians has inevitably suffered over the past two decades, but it continues nonetheless, and Mohammad Al-Nujaif is committed to ensuring his country’s bloodlines survive and flourish. As Vice President of the Iraqi Arabian Horse Organisation, Chairman and international representative of the Registration, Stud Book and Rules Committee, he is ideally placed to continue with his mission.

2 reviews for The Purebred Arabian Horses of Iraq: Myths and Realities

Aintree: The History of the Racecourse