Behind the Scenes: A Dark and Stormy Night 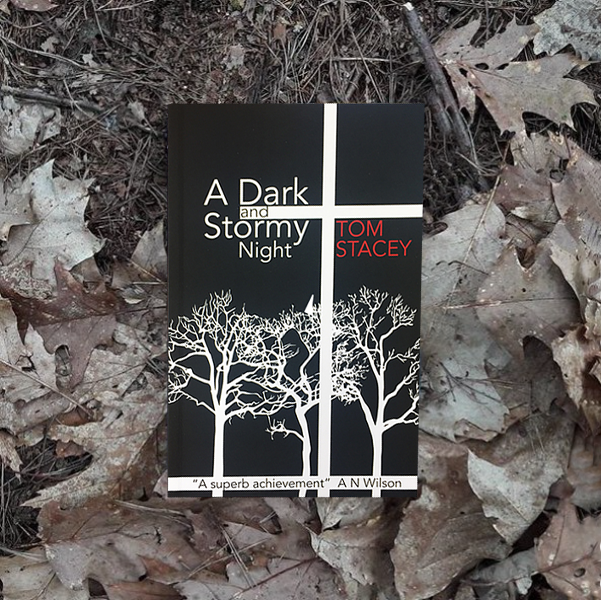 It’s time again to go behind the scenes with one of our authors to find out how their wonderful book came about. This week we have Tom Stacey, whose book A N Wilson described as ‘A superb achievement.’ A Dark and Stormy Nightwhich allows us an insight into a few hours of Simon Chance’s life, a few hours in which his life and faith in their entirety are to be re-lived.

Surely it is the equating of the Christian idea of love on the part of the Creator-God for all of his creation, reciprocated by humankind, with love in all its sublimity between Man and Woman, specifically Dante himself with Beatrice.

By his pilgrimage through Hell (Inferno) and Purgatory (Purgatorio) to Paradise (Paradiso), conducted first by Virgil then by Beatrice, her role is to lead Dante the pilgrim, who stands for all of us, to the blessedness of eternal life and the vision of God.

In real life, Dante was in love with Beatrice from his childhood.  They barely knew one another; and she, married to another, was to die at 24. Yet his idealisation of her remained in him.

In the vast sweep of the poem’s narrative, all that there is, “seen and unseen”, is brought into play by Dante’s cosmic vision of divinely engendered love.

My own irreplaceable source of Mediaeval spirituality is the sermons of Meister Eckhart, the German Dominican administrator, scholar, preacher and mystic who died aged around 68 in 1327 – he, of whom it has been said, ‘God hid nothing’.  Eckhart drew freely and boldly from all religious traditions then within reach including Plato and the neo-Platonists, and hence Buddhist, Jewish wisdom (as of Maimonides), and quite possibly Sufism. He preached the ’nothingness of God’, and the essential loss of self to the presence of the mystery of the Godhead by the agency of metaphor and analogy.

Alongside Eckhart, I turn most frequently to that outstanding treatise, The Cloud of Unknowing, which once again seeks to detach the person of prayer from crude ‘belief’ in the supernatural, but to see all that there is, seen and unseen, in the context of release of self (the ego) from time and space, sub specie aeternitatis (in the Eye of Eternity).

As an author I have assumed the role of Simon Chance, dreamed his dreams, fought his fears, loved his loves. That is the proper function of all novelists.  Yet, within a narrower scope, I identify with all my characters, male and female, old and young. Then I let the story tell itself. All convincing novels do that, in my view: it is our gift, such as we have one, as truly creative writers.

I said at the launch of A Dark and Stormy Night, Dostoyevsky was Raskolnikov when he was writing Crime and Punishment; Graham Greene was the whiskey priest when he was writing The Power and the Glory. You create the characters and let them take over. Many a true writer will tell you that.

Ah, now, Music!  When I was 12 I wanted to be a musician (I improvised on the piano for hours on end).  When I was 17 I supposed I would become a poet, and indeed wrote quite a bit of poetry.  Sometimes in my novels (e.g. The Living and the Dying) there appear poems ‘composed by’ my characters, or for them, or borrowed from my own private store of poetry for the purpose.

All my life, it has been music which has set me to compose words, as a story, of whatever it is that I am impelled to write.  Because of the ‘music’ readers judge my writing to belong to ’the annals of literature’.

I not only enjoy listening to music but performing it, nowadays by singing. I am a powerful baritone! – so powerful I can pretty well fill a church with sound when I’m on form.  As to listening, most evenings of my life are filled with Radio 3 or listening to my big disc collection.  Supremely I look to the great romantics to sweep me away: Beethoven (who straddled the Classical and Romantic periods); Schubert; Schumann; the great Russians, Tchaikowski, Mussorgski, early Stravinsky; Sibelius the Finn; Dvorak the Bohemian; Bruckner; Elgar, down to James Macmillan of our own time.

I simply don’t respond to atonal music, or ‘serial music’, and I still wonder if it will finally take root.

Across the spectrum, I am a devotee of New Orleans jazz, exemplified by Fats Waller, Louis Armstrong, Jellyroll Morton; and the great blues singers like Bessie Smith and Mahalia Jackson.

My motivation for ADark and Stormy? The search for truth at its deepest, about the role of love in the creative phenomenon of Man, the seemingly sole conscious being in the universe, and all Creation, to which we have no choice but to deem sacred, or divine.

Tom Stacey is a winner of the John Llewellyn Rhys Memorial Prize and a fellow of the Royal Society of Literature. You can buy his most recent accomplishment, A Dark and Stormy Night, right here.