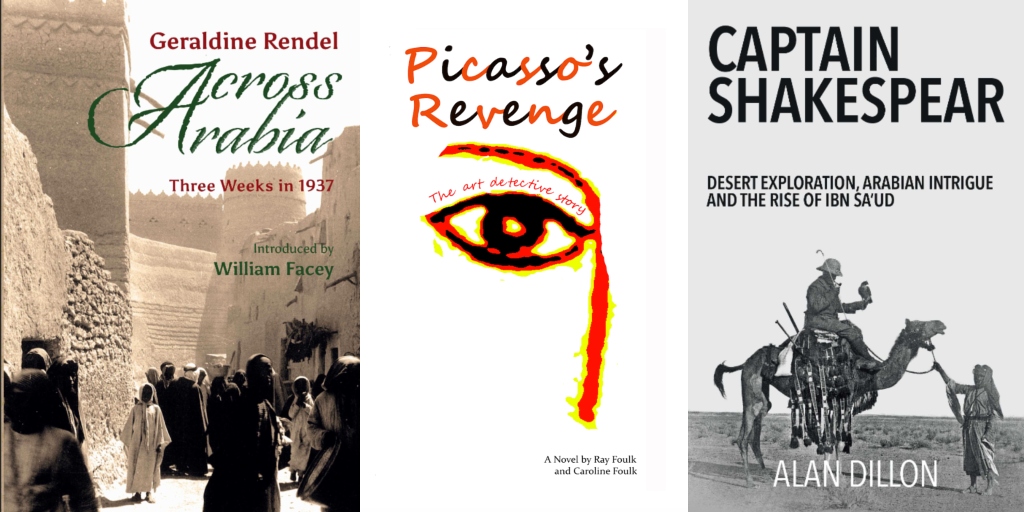 From the Isle of Wight to Saudi Arabia, Medina Publishing seeks to educate and entertain

March marks the 10th Anniversary of Medina Publishing Ltd, founded in 2009 with the mission to ‘educate, entertain, and to foster cultural understanding.’

Founder and Commissioning Editor Peter Harrigan said, “It’s been an exciting journey for Medina, and from a small office in Greater London we have now expanded our presence to the Isle of Wight, Saudi Arabia and the United Arab Emirates.”

Harrigan, who divides his time between the four locations, added, “2019 sees continued growth and this summer we are launching several new titles.  These include ‘Across Arabia: Three Weeks in 1937’ about Geraldine Rendel, the first Western woman to travel openly across Saudi Arabia as a non-Muslim and ‘Captain Shakespear: Desert exploration, Arabian intrigue and the rise of Ibn Sa‘ud’ about one Britain’s most remarkable personalities in the formative years of the modern Middle East.

Forthcoming ‘Picasso’s Revenge: The Art Detective Story’ is about art’s holy grail – ‘The Young Ladies of Avignon.’  The longstanding Prince Philip, who is the subject of our Barzipan Publishing title ‘Wise Words and Golden Gaffes’ continues to provide us with new content and author Phil Dampier is working on a new book to keep up with him!”

As one of the creators of the 1969 Isle of Wight Festival, where he originates, Harrigan added, “2019 is also the 50th Anniversary of Bob Dylan appearing at the Isle of the Wight Festival – so look out for some news about a new book celebrating the historic event.”

Talking about Medina’s success in the Middle East he said, “We have published ‘People of Ras Al Khaimah’ and ‘A Solider in Arabia’ which are supported by the Ras Al Khaimah Media Office and the Sheikh Saud bin Saqr Al Qasimi Foundation for Policy Research. We have also produced new books for the Riyadh Development Authority.  Much of our success in MENA markets is through schools, where our titles focussing on cultural history and education, such as ‘The Pearl Diver’ – a Hamilton Trust recommended resource on ‘Stories from Other Cultures’ – continue to sell incredibly well.

About Medina Publishing’s authors he said, “Our authors who help propel us have been active with presenting their work around the world. Their scope of knowledge across a wealth of genres is extraordinary and has secured our success for the last decade and the next.”

Harriet Sandys has just returned from a successful event at the Lahore Literary Festival, Pakistan, where she spoke about her personal Silk Road Journey and her book ‘Beyond That Last Blue Mountain.’ An oriental carpet restorer, Harriet traveled alone to Afghanistan in her 20s and spent the next 15 years crossing the Middle and Near East.

Dr. Jenny Balfour Paul, President of the UK’s Association of Guilds of Weavers, Spinners and Dyers, continues her world tour of ‘Deeper Than Indigo: Tracing Thomas Machell, Forgotten Explorer’ and most recently opened the Lasalle College of Art interdisciplinary focus on the colour Blue in Singapore.

Stuart Laing, former High Commissioner in Brunei, Ambassador in Muscat and Kuwait and Master of Corpus Christi College, tours internationally to discuss ‘Tippu Tip: Ivory, Slavery and Discovery in the Scramble for Africa.’ Tippu Tip was an Arab ivory trader of the late 19th century who assisted Western explorers and watched as European powers carved up Africa.

Irving Finkel, Philologist, Assyriologist, Assistant Keeper of Ancient Mesopotamian Script, Languages and Cultures at the British Museum – where he reads cuneiform inscriptions, and expert on board games, continues to spellbind with ‘The Writing in the Stone,’ – and can be found at Literary Festivals and on television programmes globally.

Sir Terence Clark, KBE CMG CVO, Vice-President of the Anglo Omani Society, Chairman of the Friends of the Basrah Museum and author of ‘The Salukis in My Life’ delights international lovers of Salukis with his tales of these ‘Companions of Kings’ while providing a personal insight to Iraq during much of Saddam Hussein’s war with Iran.

Ray and Caroline Foulk have a global following with their books ‘Stealing Dylan From Woodstock’ and ‘The Last Great Event.’  Founders of the in-schools project ‘Blue Planet Day,’ and renowned advocates for sustainability and environmental awareness, they are about to take the art world by storm with ‘Picasso’s Revenge.’

Sarah Holding, TED Talk speaker, jazz singer, saxophonist, and former architect, university professor and urban development consultant, introduced Medina Publishing to the cli-fi genre.  She has recently returned from the New York launch of the ‘SeaBEAN Trilogy’ and tours schools internationally to spread the word about the impact of climate change.

Peter Clark OBE., writer, translator, and travel and cultural consultant, has been immersed in the Middle East for over 50 years and has led cultural tours to Turkey, Syria, Lebanon, Egypt and Iran. He has been regaling global audiences with his ‘Emirates Diaries’ including tales of how to organise a royal visit, the culture of camel racing and an unpaid bill left by Margaret Thatcher.

Medina Publishing, Arabian Publishing and Barzipan Publishing titles are available globally, and newsletter recipients will be offered a range of exciting promotions over the year.