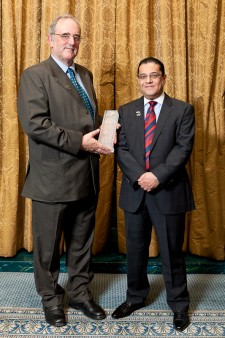 Medina are proud to announce that Peter Harrigan is the latest recipient of the Al Rawabi Holding Award, given to British individuals who have made an outstanding contribution to furthering Saudi-British relations.

The award was presented by Mr Osman Ibrahim at the Saudi-British Society’s Annual Dinner at the Institute of Directors, London.

Following Sir Sherard Cowper-Coles’ introduction, Peter Harrigan’s speech paid tribute to the modernity and pace of change in the Kingdom of Saudi Arabia, citing the new and exciting developments, in many of which he has played a part. In particular, he praised the work of the ArRiyadh Development Authority for both its vision of the future and its pace of practical implementation.