Medina vs The Rest of the World Croquet Match 2016

Picture, if you will, a quintessentially English setting: an Indian summer sun hangs in a cloudless sky, the gentle clack of mallet on ball and the clink of Pimm’s glasses drift across the manicured lawns, and a soft breeze makes the bunting dance. As the shadows lengthen, the air is filled with the sound of laughter and the smell of sizzling sausages and wood smoke.

Yes, it is the annual Medina vs the Rest of the World Croquet Match at Surbiton Croquet Club. 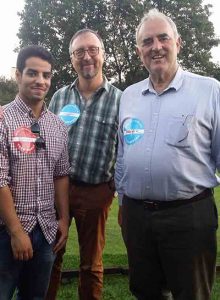 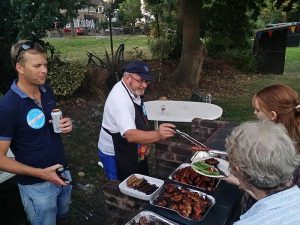 Jonathan Edwards and Graham de Kock doing what they do best. 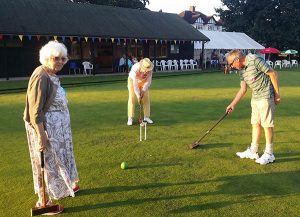 Graham Brightwell gives his partner Tom Stacey a mark, as Primrose Arnander ponders her next shot.

(r to l) Sarah Holding, Heather, Jayne, Catherine Hodkinson and Ray Foulk all appear to be waiting for something to happen. 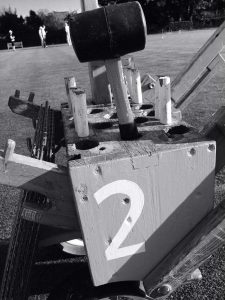 Medina fields a team of formidable talent and intellect which includes some of our brilliant authors – Sarah Holding, Ray Foulk, Primrose and Christopher Arnander, Paul Tempest and Terry Collins, as well as valued contributors to the Medina machine and treasured staff. But, competitive as they are, their croquet skills don’t always match their literary talents and it pretty soon becomes evident that the ROW have the edge. This is not entirely a surprise, since their team comprises many seasoned international players at the top of their game. In an effort to redress the balance, the tournament director decrees that the professional ROW chaps must play their shots while standing on one leg and holding a drink in one hand. They still win. Never mind, ‘prizes’ are presented to the captains (Peter Harrigan Team Medina and Tom Stacey Team World) and everyone gets a chocolate.

Dusk has fallen by the time supper is ready. Head BBQ chef Johnny (the Major) Edwards serves a meaty feast and George’s fatoush is fabulous. The Pimm’s continues to flow as the teams mingle, renewing old friendships and making new ones.

Special thanks to Sue Strong for chopping fruit for hours, Bob Osmond for manning the bar all evening, to Graham de Kock for making the name badges, and to the core SCC members for working tirelessly on preparation and clearing up, when they should have been having fun: George Noble, Chris Osmond, Graham Brightwell, Monica & Andy Dibbin and Linda & Julian Sheraton-Davis.

Thanks to everyone for coming – see you all again next year.