Million Dollar Bash, a one-day rock festival on the Isle of Wight to mark the 50th anniversary of the legendary 1969 IoW ‘Dylan’ Festival of Music. 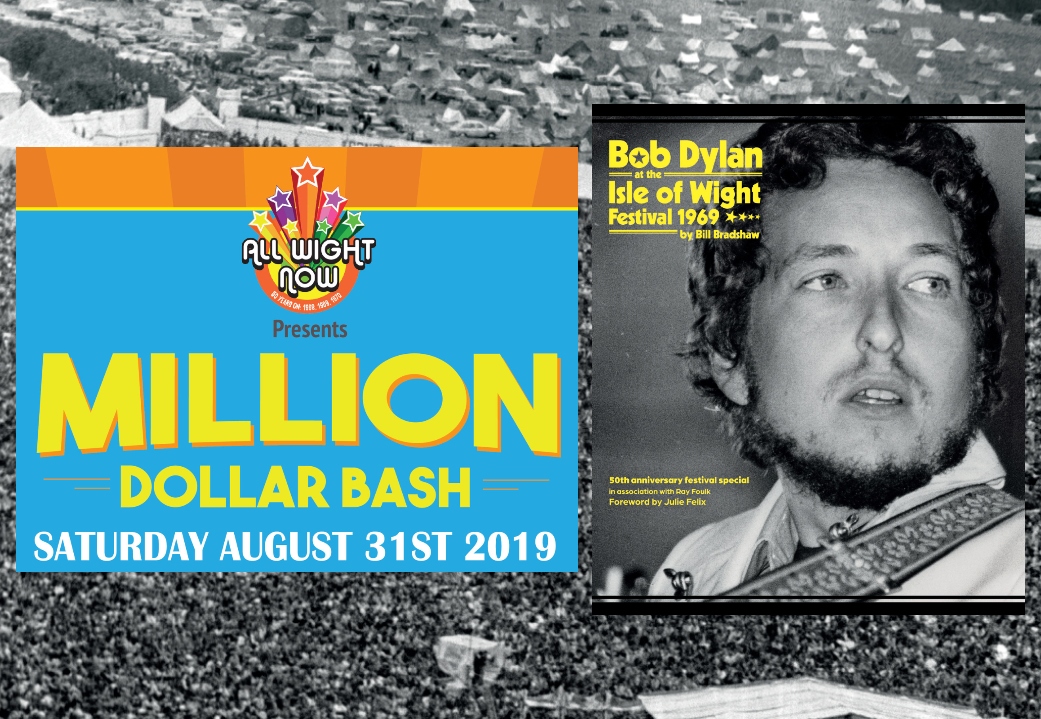 The Million Dollar Bash is a day-long festival, on Saturday, August 31.

Tickets are now on sale to honour the music and spirit of the iconic 1969 Isle of Wight Festival of Music and the historic appearance of Bob Dylan.

It aims to attract a cross-generation audience, including those who attended the 1969 event as well as all those who have since been influenced by – and love – the music and culture of that era.

A new book has also been launched to commemorate the 1969 Bob Dylan Isle of Wight Festival, Bob Dylan at the Isle of Wight, 1969. It is written by award-winning Fleet Street journalist Bill Bradshaw and is published on June 9 by Medina Publishing at £12.95.  Buy now.

It features almost 200 pages packed with first-hand accounts of the “Dylan” festival from organisers, performers and the fans who flocked to witness the event on the Island. It includes many photographs published for the first time and a revealing foreword from Julie Felix.

It also examines in detail Dylan’s extraordinary decision to end his self-imposed exile from live concert performances by accepting the invitation to make his comeback on the Island – and not at the Woodstock Festival, just an hour’s drive from his New England home.

The musical performances at the Million Dollar Bash are being curated by Ashley Hutchings MBE, regarded by Dylan himself as “the single most important figure in English folk rock”. Hutchings is hailed as the father of genre in Europe and he was a founder member of both Fairport Convention and Steeleye Span.

Apart from Dylan, the 1969 festival featured top transatlantic names such as The Band, Tom Paxton, The Who, Free, Julie Felix, The Moody Blues and Pentangle. Performers on the Bash bill either appeared on the Isle of Wight roster in 1969 or have close links to the music and ethos of the era. They include Julie Felix, Richard Thompson, Wishbone Ash, Jacqui McShee’s Pentangle, Kossoff: The Band Plays on and Dick Taylor & Phil May of The Pretty Things with JC & Angelina. At the top of the bill will be Hutchings’ specially-assembled Dylancentric, an all-star band put together to honour Dylan’s Island set.

The event will be staged at the County Showground, near Cowes, in two performance areas: a big-top Gothic tent with a capacity for 3,000 fans and a smaller acoustic tent.

A third tent will feature historic exhibits and imagery from the historic 1969 Festival. This will include the original WEM speakers and other sound equipment used in the event 50 years ago, Festival imagery, ephemera and memorabilia from the original Isle of Wight Festivals.

As well as the musical performances scheduled spoken word and poetry will also feature at the event.

Million Dollar Bash is hosted by All Wight Now. With a core of music enthusiasts, AWN has been established to stage celebrations of the 1969 and (in 2020) the 1970 Isle of Wight Festivals. Plans for the 2019 Event follow on from the successful staging of All Wight Now 2018, which took place at Tapnell Farm in September 2018. The AWM group is also working on plans for an international Festival Visitors Centre to be located on the Isle of Wight