The launch of Ann Sawalha’s Through the Palace Keyhole

The launch of Ann Sawalha’s Through the Palace Keyhole in Amman on Sunday 14 December was a hugely successful and enjoyable event. Held in the ballroom of the 5-star Regency Palace Hotel under the patronage of HRH Princess Muna, mother of King Abdullah II of Jordan, it was attended by Princess Muna herself and Their Royal Highnesses Princess Alia (eldest daughter of King Hussein), Prince Raad (the Chief Chamberlain) and his wife Princess Majda Raad, as well as many other dignitaries including the American Ambassador to Jordan, Alice Wells.

The Directors of Medina Publishing, Kitty Carruthers, Peter Harrigan and Jonathan Edwards were delighted to be present, having flown in from London and Riyadh for the occasion, and to see Through the Palace Keyhole celebrated in such style.

When Ann Hutchison met Sami Sawalha in Detroit in 1958, she knew nothing of the family she was shortly to marry into – a proud and ancient tribe who trace their roots to before the coming of Islam. During the 50 years of marriage to Sami, the shy American who spoke no Arabic became an integral part of the extensive Sawalha family, embracing their way of life and being taken to their hearts in return. The story of their life together, through thick and thin and turbulent times in a troubled region, is told with great honesty in Ann’s memoir. Many of Sami’s close family were in attendance on Sunday night, including Ann and Sami’s son Hanna and his wife Grace, who with loving care transformed the ballroom into a warm and welcoming space. 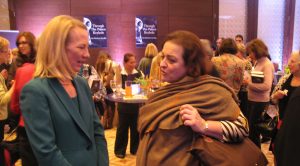 The Medina Directors were treated with the same open-hearted warmth and hospitality by every one of Ann’s extended family, which made their visit one for ever to be remembered.

The book is justly receiving attention in the local and international news: 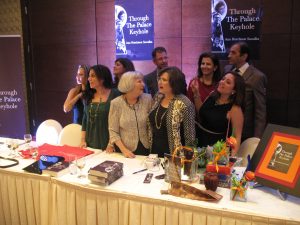 Ann and the Sawalha family